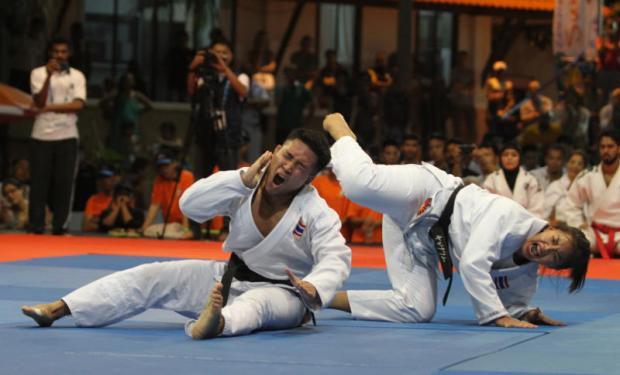 Suphawadee Kaeosrasaen and Kunsatri Kumsroi teamed up to win the first gold medal for the kingdom after beating Pakistan's Sundus Salam Khan and Maryam 36-33 in the women's show system event.

Areewan Chansri and Ratcharat Yimprai then added the second gold after they won the mixed duo show system with a 39-34 victory over Pakistan's Muhammad Ammar and Sundus Salam Khan.

In the women's under 60kg category, Onanong Saengsirichok only got silver after losing to Annie Ramirez of the Philippines 99-0.

Thailand will take on Kuwait in the flag football final at Saphan Hin Sports Complex today.

Captain Wuttikorn Harnwongphaiboon said: "Tomorrow if we can play like we did today, I am sure that we will win the gold medal for Thailand."

Today's opening ceremony starts at 6.30pm and will be shown live on NBT.

Lanlana the only Thai in singles draw