JEREZ DE LA FRONTERA (SPAIN) - Toro Rosso launched their car for the 2015 Formula One season on Saturday, placing their faith in the hands of the youngest driving team in the sport's history. 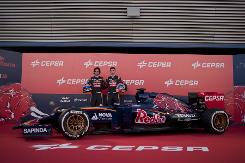 Toro Rosso's drivers, Dutch Max Verstappen (R) and Spanish Carlos Sainz Jr pose during the unveiling ceremony of the Toro Rosso STR10 racing car as part of the Formula One test days, at Jerez racetrack in Jerez on January 31, 2015

The STR10 was unveiled at Jerez on the eve of the first four-day pre-season test of the year.

Carlos Sainz, 20, the son and namesake of Spain's former double world rally champion, will drive one of the cars.

The other seat will be occupied by 17-year-old Max Verstappen, the son of ex-F1 driver Jos.

"We have put in a lot of effort, time and money into this new car. It's beautiful, clean and I am sure it will go very fast," said team principal Franz Tost.

Toro Rosso finished in seventh place in the 2014 season and will be contesting their 10th championship campaign this year.

Verstappen, who will test on Monday and Wednesday with Sainz in the seat on Sunday and Tuesday, said he was eager to get behind the wheel for the first time.

"I can’t wait for the season to start and tomorrow will seem like a very long day, watching Carlos in the car," said the Dutch teenager.

"With two days in the 2014 car at the Abu Dhabi test and the Friday mornings I did last season, combined with time spent in the simulator, I feel well prepared and I’m really up for this challenge, which is very exciting."