BERLIN - Bayern Munich coach Pep Guardiola "would do well to adjust his attitude", warned Herbert Fadel, head of the German FA's referee commission, after the Spaniard ran towards the fourth official in last week's 1-1 draw against Schalke. 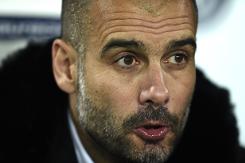 Guardiola is under close scrutiny after his 45-metre run to protest a disallowed Robert Lewandowski goal.

Within seconds of the decision, Guardiola stormed out of his technical area and was seen talking to and also touching the assistant at the corner flag. On his way back, Arjen Robben headed the corner home to give Bayern the lead and the coach then embraced fourth referee Robert Kempter.

"With all due respect to strong emotional reactions, we crossed a line. A coach leaving his technical area to rush towards an assistant at the corner flag needs to be sent to the stands."

Fandel reaction comes after former FIFA referee Urs Meier's assertion that Guardiola "can do whatever he wants".

"By acting like that, Guardiola undermines and ridicules referees," insisted Meier, who also advocates sending the Bayern manager to the stands after his "disrespectful" behaviour.