Pungluang sor Singyu stopped Ryo Akaho of Japan in the second round to reclaim the WBO bantamweight title in Ratchaburi yesterday. 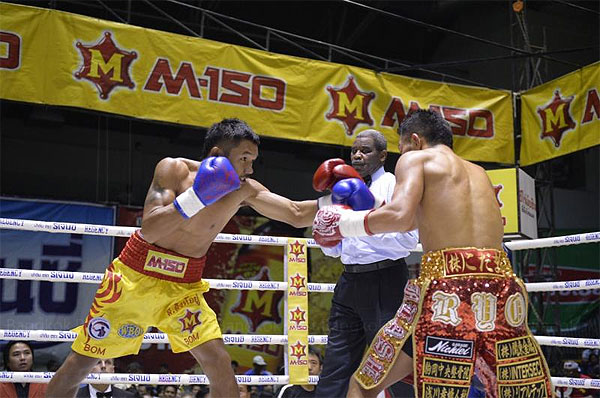 In the fight for the vacant 118-pound division belt, the Thai did not waste his chance in the second round when he cornered and floored Akaho with a powerful right hook.

The stunning victory in front of his hometown fans made him a two-time champion.

In 2012, Pungluang, now 27, stopped AJ Banal in the ninth round to win the title, also for a vacant championship, in the Philippines.

“I am really happy and proud of myself, and to have made the fans happy,” said Pungluang after the bout.

“I promised them I would win the title and I did it.”

Pungluang is only Thailand’s third title holder at the moment with the other two being Amnat Ruenroeng (IBF flyweight) and Wanheng Meenayothin (WBC minimumweight).

Pungluang, who was stopped by Japan’s Tomoki Kameda in his second world title attempt last July, improved his record to 51 wins (31KOs) against three losses.

It was 29-year-old Akaho’s second loss and first by a knockout.

Pungluang’s manager Pariyakorn Rattanasuban said that she was relieved and happy to have another world champion.

“We made a lot of effort and spent more than 10 million baht to make the fight happen,” she said. “Pungluang deserves credit for his great win. He planned to study Akaho for four rounds but when the chance came, he grabbed it.”

As the winner of a vacant title, Pungluang now has to face a mandatory bout in his first defence.

Pariyakorn confirmed that the fight will be held in Thailand.

“It will definitely take place in Thailand,” she said. “I have learned lessons from when he lost the title two years ago.”

After beating Banal in 2012, Pungluang flew to Namibia for his first and mandatory fight and lost to Paulus Ambunda.

“I want to prove myself as the strongest flyweight,” Ioka said. “The most important thing is to perform well.”

“He [Sosa] has a long reach and a lot of extension on his straight punches.”