Thailand come from behind to draw with Iraq
Sports

Thailand come from behind to draw with Iraq

Kroekrit Thawikan contols the ball in a match with Iraq at the Rajamangala National Stadium on Tuesday. (Photo by Somchai Poomlard)

The Thai national team showed its fighting spirit after coming back from a two-goal deficit on Tuesday to share a point with Iraq in its World Cup Group F qualifying match. 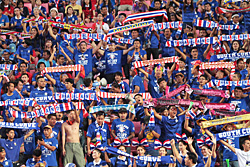 Fans pack the Rajamangala National Stadium on Tuesday to cheer their team taking on visiting Iraq. (Photo by Somchai Poomlard)

Iraq looked too strong for the host as the visitors took two goals before and after the interval.

Justin Meram's shot outside the box 11 minutes before the break made the visitors in front and a header from striker Younus Mahood four minutes into the second half sealed the hope of the Thai national team to win the match.

The War Elephants looked settled after staying behind and they came back to the game after a spot kick by captain Theerathon Bunmathan 11 minutes from time reduced the deficit.

Mongkol Thoskrai's clinical shot three minutes later made it 2-2 as the almost 60,000 Thai fans packed in the stadium erupted.

The draw means Thailand have seven points from three matches and Iraq collected four points with a game in hand. It keeps alive the country's hopes to qulify for the World Cup.

The eight group winners and four best second-place teams advance to the continent's third and final qualifying round for Russia 2018.

Taiwan and Vietnam are the other two teams in the group in the Asia' second qualifying round for the 2018 World Cup.

War Elephants coach Kiatisak Senamuang said on Monday that the Thai team eyed a win as they were in full strength with no injury worries.

Thailand is facing the worst drought in four decades, and the inadequate water supply from dams means farmers are hit the hardest.

SCB out of favour among analysts as bad loans rise

Siam Commercial Bank Plc, one of Southeast Asia’s largest lenders, has fallen out of favour with securities analysts after reporting fourth-quarter results that raised concerns about loan quality.

After sending police divers on a fruitless 8-hour search of a river, the headmaster accused of the Lop Buri gold-heist murders tells police where he really hid it.