World No. 1 Novak Djokovic takes a selfie with a tennis fan at Suvarnabhumi airport on Thursday.

Tennis stars Novak Djokovic and Rafael Nadal arrived in Bangkok on Thursday for an highly paid exhibition match between the world’s current and former No. 1 players. 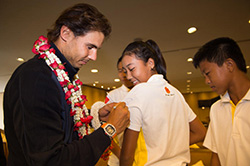 Spanish player Rafael Nadal put his signature on a T-shirt of a fan at the airport.

Nadal touched down first to Suvarnabhumi airport from London, followed by his rival, who came to Bangkok from Zurich.

They were greeted by Thai tennis fans waiting for them at the airport before going to their hotel.

The Spanish former No. 1 went to Indoor Stadium at Hua Mak for practice and the Serb will take his volleys later Thursday.

The two will face off in an exhibition match on Friday with all seats sold out.

The match was organised by the Lawn Tennis Association of Thailand and sponsored by True Corp, CP Group and about a dozen other sponsors at an estimated cost of 150 million baht. The pair will earn approximately 84 million baht for their day's work.

Djokovic showed his poise as the top tennis by claiming three out of four Grand Slams tournaments this year at the Australian Open, Wimbledon and the US Open.

Nadal endured a disappointing season with his best slam performances coming in Melbourne and the French Open in Paris where he reached the quarterfinals at the two events.