BEIJING - Rafael Nadal was broken four times by one of his former ball boys before he struggled into the China Open second round in an unconvincing return to action on Tuesday. 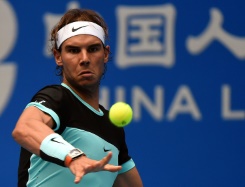 Rafael Nadal of Spain hits a return to Wu Di of China during their first round singles match at the China Open in Beijing on October 6, 2015

The Spanish great ultimately won 6-4, 6-4, but not before he trailed in the second set against China's 230th-ranked Wu Di, who once tossed him balls and towels in his native Shanghai.

Nadal, 29, was playing for the first time since his third-round defeat at the US Open, but it was a far from satisfying return as the 14-time Grand Slam-winner continued to scratch around for form.

"We don't need to talk more about confidence, rhythm. That's my level today, and I'm going to work hard to try to improve my level of today," he said.

On a heavily polluted day in Beijing, Wu anticipated superbly when he lunged for a forehand volley winner for his first break of the Spaniard early in the first set, and he wasn't done yet.

Wu broke again to go ahead in the second set but with both players uneasy on serve, Nadal was able to wrap it up after 86 minutes and progress to a second-round meeting with Vasek Pospisil.

"I'm practising well, so the level of tennis is going to be there sooner or later. I am working a lot to make that happen. I think I'm closer to that," Nadal said.

"I know it's obvious that I need results to confirm that. But we are almost at the end of this season and I have time to keep playing the last tournaments of the year with the chance to practise the things that I need to do for next year.

"My goal is recover the level especially to play my best on clay next year."

Eighth-ranked Nadal has said he's using the year's final events as practice for next season, after a forgettable 2015 in which he didn't progress beyond the quarter-finals of any of the Grand Slams.

As for Wu, 24, it was a memorable encounter after he was a ball boy for Nadal at the Tennis Masters Cup in Shanghai and later progressed to become a practice partner.

"As for the ATP Finals (Tennis Masters Cup), I served as the ball boy for Rafa. So right now I played Rafa. It's not a small deal," he said.