Kroekrit Taweekarn (third left) and teammates celebrate his goal during a World Cup 2018 qualifier between Vietnam and Thailand on Tuesday at Hanoi's My Dinh stadium. (AFP photo)

Thailand cemented its position as Group F leaders on Tuesday after cruising past host Vietnam 3-0 in a crucial World Cup qualifying match in Hanoi.

The War Elephants went to the Vietnamese capital as the group leader and expected a tough match from the home side. But a long-range ball fired by Kroekrit Taweekarn outside the box 29 minutes into the game set the tone as the Thais grabbed control.

The Thais could have led by two goals before half time except for a free kick by Pokklaw A-nan that hit the bar.

Vietnamese defender Dinh Tien Thanh gifted the visitors another goal 11 minutes from the interval after putting a pass from Kroekrit into his own net. 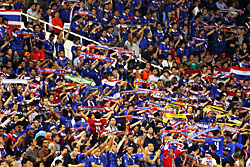 Thai fans cheer for their team during a match between Vietnam and Thailand in Hanoi on Tuesday. (EPA photo)

Captain Theerathon Bunmathan extended the lead to three goals for Thailand with a close-range shot 20 minutes before the final whistle.

About 2,000 Thais were in the packed 40,000-seat My Dinh National Stadium in Hanoi to cheer their team, which beat Vietnam 1-0 in the first leg in Bangkok.

The eight-group winners and four best runners-up will go to Asia's final qualifying round for places at the 2018 World Cup in Russia.

Thailand now has 10 points from four matches, ahead of Iraq with have five and Vietnam four. Taiwan has yet to get a point and is at the bottom of the table.