Wuttichai Masuk became the first Thai boxer to qualify for the 2016 Olympics yesterday. 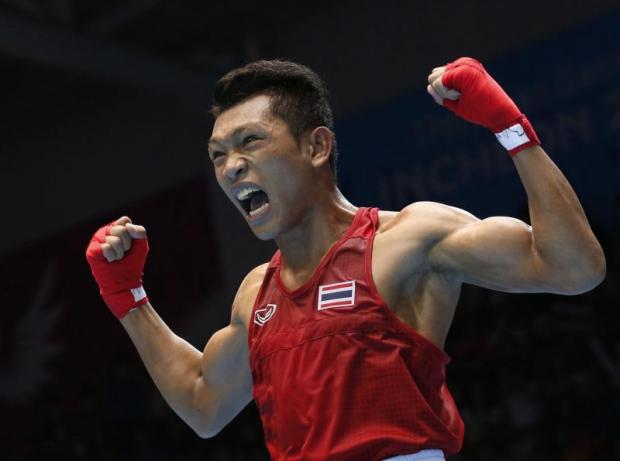 The Asian champion earned a ticket to the Rio Games after Cuba's Yasniel Toledo withdrew from the bronze medal match in the 64kg division at the Aiba World Boxing Championships in Doha.

The top three fighters in this weight class at the Doha tournament earned places at next year's Olympics.

Wuttichai claimed the bronze medal as Toledo, the top seed in this category, complained about stomach problems.

Toledo is also eligible to take part in the Rio Games thanks to his win at the World Series of Boxing (WSB) in April.

Wuttichai, winner at last year's Asian Games and last month's Asian Championships, will get two million baht in bonus from the Thailand Boxing Association (TBA) for getting an Olympic spot.

Thailand had six fighters in Doha but only Wuttichai reached the semi-finals.

Pachanya Longchin (60kg) was beaten in the second round while Chatchai Butdee lost in the quarter-finals.

Thailand manager Paiboon Chaisrisawat said his team's overall result was not too bad as it was a tough tournament.

There will be two more Olympic qualifying rounds in China and Azerbaijan next year and Paiboon hopes his boxers will get four more tickets to Rio.

"We remain confident that we will get at least five Olympic spots," he said.

Thailand coach Taweewat Islam said the boxers and all parties involved must work harder to achieve the goal.