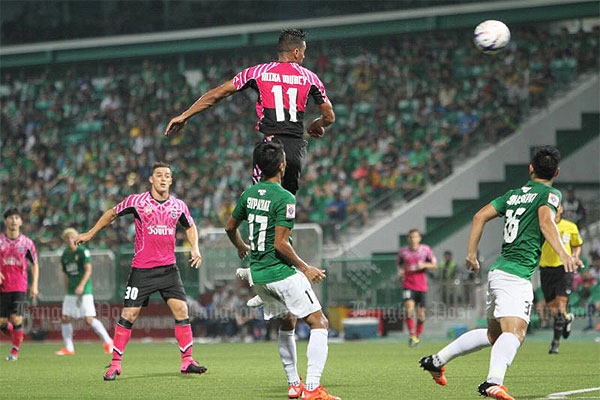 Chainat's Michael Murcy, No.11, heads the ball against Bangkok Glass.

Chonburi also didn’t fare well on their return to the field as they could only manage a 1-1 draw at Si Sa Ket that saw them stuck in fifth place in the league standings with 42 points. Chonburi have now gone four matches without a win.

SCG Muang Thong United and Buriram, who both play their matches today, are the joint leaders with 56 points.

In yet another upset, cash-strapped Saraburi edged mid-table Army 2-1 yesterday. The victory pushed the Navy out of the red zone and they are now joint 14th with struggling giants BEC Tero. BEC Tero, however, have a game in hand and play today.

Suphanburi were dominant in the first half in front of their home crowd with South Korean Lee Seung-Hee putting them ahead in the 27th minute.

Amorn Thammanarm produced the equaliser for Navy in the 48th and Pisarnsin picked up his first five minutes later. Sergio van Dijk was quick to even the score at 2-2 for the hosts but it took Pisarnsin only a few minutes to find the net again before nailing home his third in the dying moments.

After a sluggish first half, Bangkok Glass moved up a gear and a couple of strikes by Aridane Cabrera in the 73rd and 80th minutes gave them a 2-0 lead over Chainat.

Chainat’s attempts to get level with the Glass Rabbits were all in vain and, to their dismay, Bodin Pala dealt them the third blow in the last minute.

Bangkok Glass stayed put in third place, lagging behind the joint leaders by a massive 10 points.

Government reports 5 new cases of novel coronavirus on Sunday, all in quarantine, for total of 3,190. Death toll still 58.

PARIS - Although crude prices have rebounded from coronavirus crisis lows, oil execs and experts are starting to ask if the industry has crossed the Rubicon of peak demand.