Saraburi out, BEC Tero back in top league
Sports

Saraburi out, BEC Tero back in top league

A pullout by cash-strapped Saraburi from the Thai Premier League has paved the way for the relegated BEC Tero Sasana to return to the top flight of national football. 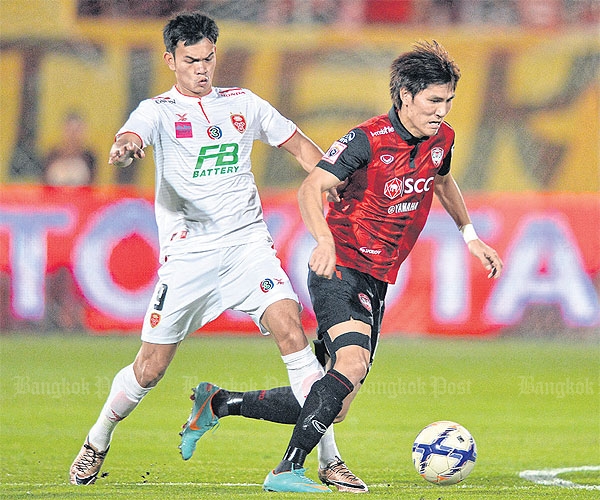 BEC Tero will play Muang Thong United in their first match of the new TPL season on Feb 27.

A decision to this extent was announced by the TPL executive committee yesterday following a lengthy meeting at a Bangkok hotel.

After the meeting, the Football Association of Thailand lawyer Narinpong Jinapak announced: "Since Saraburi FC will not be sending a team to participate in the 2016 season, BEC Tero Sasana will replace them in the TPL."

BEC Tero had been relegated to the second-tier League One after finishing 16th in the 2015 TPL season in December last year. Port and TOT had finished 17th and 18th, respectively, and were relegated as well.

Narinpong explained: "BEC Tero Sasana have been reinstated in the TPL because they were the best team among the three relegated clubs."

Commenting on Saraburi's future, the FAT lawyer said: "If they want to come back and play, they would have to start from the regional league according to the FAT regulations.

"BEC Tero Sasana will take their place in the TPL and there will be no play-offs among the relegated teams."

Meanwhile, another financially-troubled squad Police United, one of the three teams promoted to the TPL this year, were given four days to resolve their problems and obtain a licence from the TPL.

Narinpong said: "The Police United are facing problems in getting a licence from the TPL and they now have until Feb 8 [Monday] evening to put their house in order and obtain the nod."

Earlier reports had claimed that the TPL and FAT bosses had decided to throw Police United out of the top league as the club had failed to pay salaries of about 50 million baht to 19 players by 5pm on Wednesday.

"If Police United fail meet the set criteria again, they would be denied a place in the TPL and the fourth-placed team from the League One will come in to replace them in the TPL in the new season," said Narinpong.

The relegated TOT had faced similar problem with payment of one month salaries of their players and Narinpong said the club board was in the process of arranging the cash, reportedly worth two million baht.

The FAT lawyer added: "For the next year, the regulations will be stiffer. In the absence of tough rules and regulations, we are afraid, the Thai football will fail. We have a very young league and and we need to keep it on the right track."

The draw for the new season of the TPL was also announced yesterday with 2016 TPL officially kicking off on Feb 27.

The big match of the opening round will pit defending champions Buriram United against fourth-ranked Chonburi. The match will be played on Feb 26 because Buriram have to prepare for an AFC Champions League match later.

Meanwhile, the play-off between Sukhothai FC and Nakhon Pathom United will be played on Wednesday with the winners earning a place in the TPL.