Thailand coach Kiatisak Senamuang has made an extraneous effort to conceal his relief after his men restricted giants South Korea to a paltry 1-0 win in a friendly in Bangkok on Sunday night, saying he is "not happy at all" with the result. 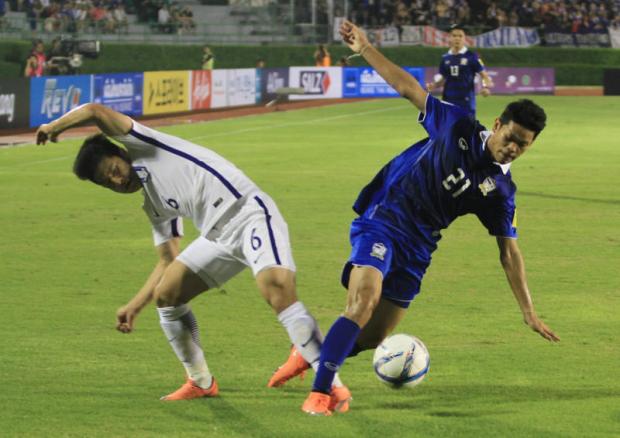 But at least he should be pleased in financial terms as Football Association of Thailand president Somyot Poompunmuang promised after the match that the FAT will give the team a bonus of 30 million baht.

The bonus is to reward the Thai team's effort in topping Group F to make it to the 12-team final stage of Asia's qualifying battles for places at the 2018 World Cup. This is the second time Thailand have reached the phase with the first being their campaign for a spot in the 2002 World Cup.

After the game, Kiatisak apologised to the Thai fans for not being able to beat South Korea, but quickly said that his men were up against "a strong team".

"Our players were tired after the long journey from Tehran [in a World Cup qualifier against Iraq on Thursday] so we gave chances to players like Sarawat Dechmitr, Jakkraphan Kaewprom and Prakit Deeprom.

"I had told the players that I would treat a draw as a victory, but we lost 1-0. We did not lose by three or four goals, so everyone is happy. But as the coach, I am not happy at all."

Kiatisak added: "If we can reach the World Cup finals, it will be a great feat. However, if we can't make it then we should at least narrow the gap with the Asian giants. We must learn to play a number of different styles of football and improve our fitness level as well."

South Korea coach Uli Stielike said: "Tactically, both sides were even and the result could have easily been a draw. However, we created more chances so we deserved to be the winners. We are happy that we have been unbeaten in eight matches without conceding a goal.

"Thailand have made progress and their strong point was their short-passing game. However, they would need to continue this development process if they were to succeed at a higher level."

HAT YAI: Thai Lion Air, a low-cost airline, has announced the suspension of five flights between Hat Yai international airport in Songkhla and Chengdu, the capital of southwestern China's Sichuan province, as a precaution against the spread of the coronavirus.