When Thailand's Ratchanok Intanon staged a remarkable comeback to edge defending champion Sun Yu of China in the Singapore Open final yesterday, she achieved a number of milestones, rising to the top spot in world rankings. 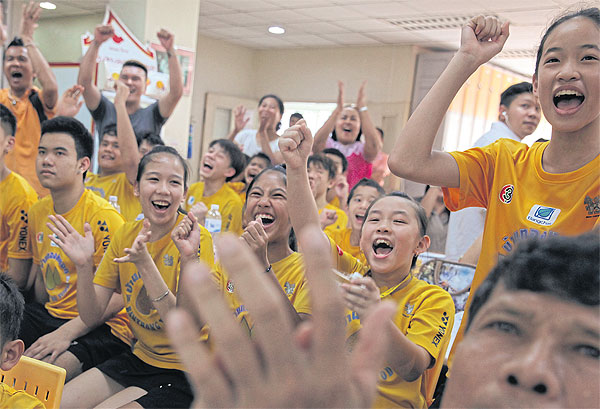 Ratchanok's 18-21, 21-11, 21-14 victory over Sun in the women's singles title showdown was her third successive Superseries win in as many weeks after her triumphs in India and Malaysia. She had earlier captured the Thailand Masters crown in February in Bangkok as well.

Ratchanok, also known as Nong May, will take over top place in the world from Spain's Carolina Marin when the weekly world rankings are updated on Thursday.

The 21-year-old Yasothon-native is the first Thai badminton player to become No.1 in the world singles rankings and the first woman in the world to complete a hat-trick of badminton titles.

Ratchanok, who has now established herself as one of the favourites for Olympic gold, said the win would give her a boost for Rio.

"Now I am more confident to get a gold at the Olympic Games," she said.

"I thought that today would not be my day and she was playing well. My body was tired from the three weeks but I just wanted to do my best."

Despite losing 18-21 in the first set as the lanky Sun Yu put her superior reach to better use, Ratchanok coasted to a 21-11 victory in the second.

She then claimed the third set 21-14 as her opponent appeared rattled by several errors.

The 2013 world champion added: "I conceded the first set, but it didn't affect my confidence. I was able to play my game and all I had to do was to wait for an opportunity to wrest the momentum.

"It was in the middle of second set that Sun started committing errors and I gained the upper hand. She tried to engage me in longer rallies but I just adhered to my game plan."

Sun Yu, ranked 14th in the world, told reporters after the match: "I played well at the beginning but I got nervous when I was leading."

The third seeded Thai took home the winner's cheque of US$26,250 (926,000 baht). A blushing Ratchanok later told true4you that she is now expecting a green light from her father to foster a serious relationship with her boyfriend Pannawich "Tawan" Thongnuam.

Before Ratchanok's departure for the Singapore Open, her father Winaschai had reportedly set winning the third Superseries title in a row as a pre-condition for giving his consent.

"Tawan sent encouragement every day and I did my job. I hope Dad will give me the green light now," said Ratchanok with a coy laugh.

On a more serious note, Ratchanok added: "Claiming the No.1 spot in the world had been the top priority and I am glad to have achieved that."

Ratchanok will now take a break before defending her title at the Asian Championships in Wuhan, China later this month.

She will later take part in the Uber Cup finals and the Superseries Premier Indonesia Open next month where she is also the reigning champion.

Meanwhile, Prime Minister Prayut Chan-ocha yesterday applauded Ratchanok's rise to the badminton throne and wished her a strong body and mind for further challenges ahead.

Gen Prayut asked all Thais to join him in cheering her, together with her national quad, at the Olympic Games in Rio de Janeiro in Brazil, this August, government spokesman Sansern Kaewkamnerd said, quoting the premier's reaction after Ms Ratchanaok's champion match.

"But cheering must go with understanding," he quoted Gen Prayut as saying.

"Please don't put pressure on her or expect victory every time. Everyone has both excellent and exhausted moments."

But before the world greatest sport event in the summer, Ms Ratchanok is scheduled to defend her 2015 women's single tile in the Badminton Asia Championships 2016 in the Chinese city of Wuhan during April 26 and May 1.

She will join the games after a one-week break from exhausting matches in India, Malaysia and Singapore. Ratchanok will arrive at Don Mueang airport today at 11.35am.

Maj Gen Sansern yesterday said Gen Prayut gave a big thank you to all the people behind Ratchanok's success, including her coaches and family. The prime minister yesterday also admired Thai badminton veteran Boonsak Ponsana for his success in joining the Olympic Games for a fifth time.

"He is a model sportsman for maintaining good health and performance," Maj Gen Sansern quoted Gen Prayut as saying.

For decades Pakistan International Airlines Corp stood for a resurgent post-colonial nation, flying the flag from New York to Tokyo. Now the airline is struggling to recover from a fatal crash, years of losses, a collapse in global air travel and the stunning revelation that almost a third of the nation’s pilots obtained fake licences.