A digital talent shortage, fewer digital products and uncertain policies have put Thailand near the bottom of the digital nation index, says a Singapore-based advisory firm.

The findings are laid out in Digital Nation: Policy Levers for Investment and Growth 2017, a study conducted by AlphaBeta, a strategic and economic advisory. 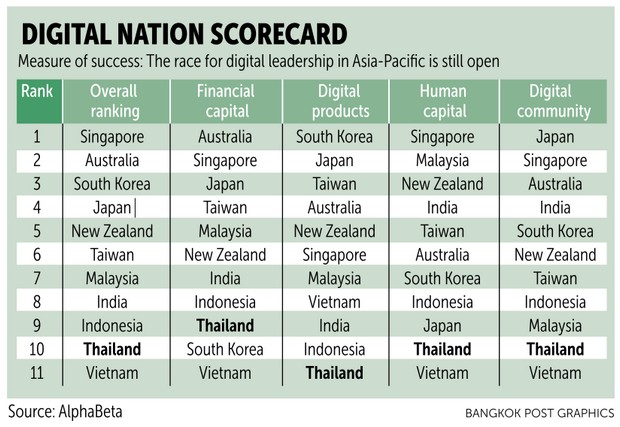 Thailand ranked near the bottom in the overall ranking of digital nations, topping only Vietnam. Singapore scored the highest overall.

Speaking at a seminar held by the Thammasat Consulting, Networking and Coaching Centre, Mr Thompson said Thailand should shift from digital economy and put more emphasis on becoming a digital nation.

Digital economy only focuses on digital literacy and entails passively waiting for foreign direct investment, he said. Those economies only focus on broadband infrastructure improvement for universal access and regulations.

By category, Thailand ranked ninth in financial capital, 11th in digital products, 10th in human capital and 10th for its digital community.

With its inconsistent policies on digital tax collection and over-the-top regulation, Thailand is less attractive than other countries, Mr Thompson said. 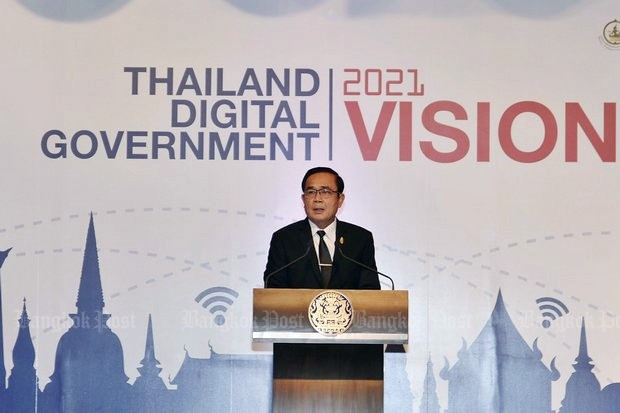 The vision is failing to meet the reality, according to a new report that ranks Thailand No.10 out of 11 Asian nations. (Bangkok Post file photo)

The government should form partnerships with digital multinational firms, he said, pointing to the collaboration between Google and the Indian government on free WiFi at railway stations.

"We see that Singapore is a leader in regulatory issues, as they create new flexible regulations for fintech and healthcare," Mr Thompson said.

He said Thailand should enact a top-down single policy that comes from different agencies working together, not solely the Digital Economy and Society Ministry.

Indonesia, for example, has two policies: one promoting the digital nation, the other mandating data localisation.

"On average, we found that each county in the region has 60-70 agencies working on digital related policy," Mr Thompson said. "They need to harmonise their policies."

The survey found that multinational digital companies play an important role in helping startups in terms of finance, digital ecosystem and educational programmes.