Mr Nuttapon, left, recently met with Mr Yasuo in Tokyo to discuss ways to further strengthen collaboration to promote digital startups during every stage of growth as well as persuade Japanese investors and startups to participate in Thailand's smart city project in the EEC.

NTT Group, a global tech and business solutions provider, plans to support Thailand 4.0 initiatives under the umbrella of the 5G Global Enterprise Solution Consortium (5GEC), a group of leading tech firms that provide one-stop 5G solution services for organisations to pursue their digital and innovation journey.

Private 5G networks allow enterprises to create intelligent and integrated platforms that can provide a foundation for innovation in various sectors, including agriculture, manufacturing, power plants, logistics, transport and healthcare.

Private 5G is less affected by network failures or congestion when compared with the local telecom operators' service, said Mr Siddiqi. Municipalities and enterprises can build private 5G network to meet the needs of regions or industries.

He said private 5G started in Japan in December 2019 with licences issued to independent entities and communication companies.

The frequency bands for private 5G have been allocated as dedicated bands for local 5G in Japan, comprising 4.6 to 4.9 gigahertz and 28.2 to 29.1GHz with a total of 1,200 megahertz of bandwidth.

"The private 5G market trend in Japan is expected to expand in earnest around 2023 to 2025 and the demand and practical deployment will radically increase along with the price reduction of private 5G equipment," he said. 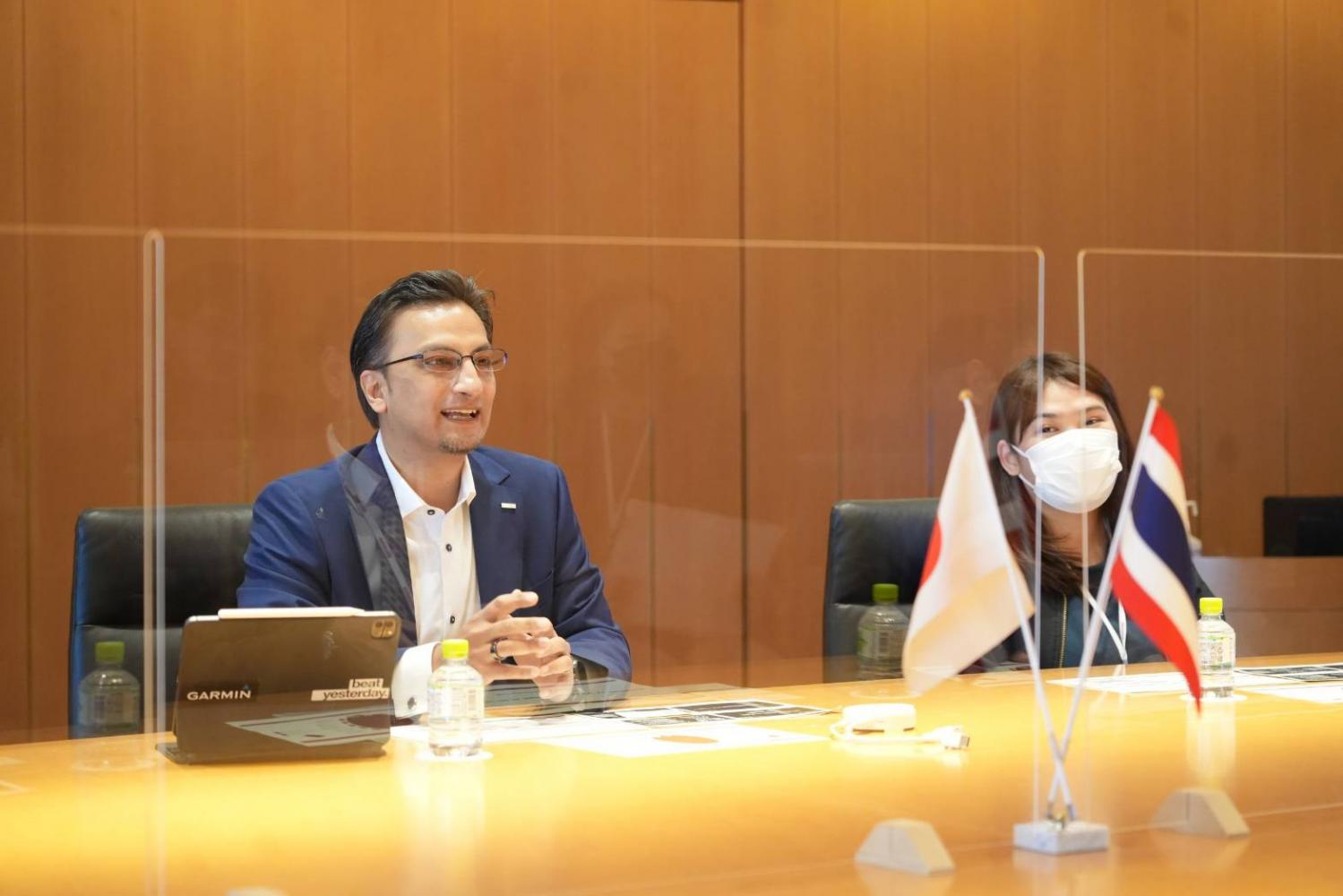 Mr Siddiqi, left, says 5G is a cornerstone of other advanced digital technology such as artificial intelligence, Internet of Things, extended reality and cloud.

In February last year, Japan's telecom giant NTT Docomo and leading international firms signed an agreement to establish the 5GEC in Thailand. It also has a plan to expand its network to other countries in Asia-Pacific.

The 5GEC can help deal with business issues including the establishment of secure and hi-speed network, simplifying processes and reducing cost, and deploying optimal and innovation solutions.

By coordinating the use of each member's strengths such as advantages in network technologies or sales and marketing networks, the 5GEC will provide professional consultation regarding 5G solutions, especially flexible and highly secure private 5G networks that function independently of public networks offered by local telecom operators, said Mr Siddiqi.

The 5GEC's targets include manufacturing and construction firms in Thailand.

The consortium will draw upon NTT Docomo's leadership in open radio access network (O-RAN), high expandability and open interfaces to support various mobile frequencies in each country and connect devices provided by various vendors, he said.

"5G is a cornerstone of other advanced digital tech such as artificial intelligence (AI), Internet of Things (IoT), extended reality (XR) and cloud, which are an important part of digital transformation," said Mr Siddiqi.

According to him, the 5GEC is ready to bring its strength to support enterprises in the Eastern Economic Corridor (EEC) and work with state agencies, such as the National Broadcasting and Telecommunication Commission (NBTC), to contribute optimal benefits to the country's 4.0 policy.

He said he wants to see the allocation of additional spectrum ranges for usage, particularly among enterprises through licences provided by the NBTC.

The allocation of spectrum ranges should ensure affordability or even come without a licence to promote digital transformation, he said.

Nuttapon Nimmanphatcharin, president and chief executive of the Digital Economy Promotion Agency (Depa), said he is aware that the telecom regulator is looking into the prospect of allocating spectrum bands without licences for enterprises, which could support private 5G network ecosystem.

Mr Nuttapon, along with Depa's executives, recently met Tawara Yasuo, director-general of the Global Strategy Bureau at the Ministry of Internal Affairs and Communications of Japan (MIC), to discuss cooperation between the two agencies to promote digital startups in Thailand.

During the trip to Japan, he also persuaded Japanese investors to invest in Thai startups and participate in the country's smart city project in the EEC.

Depa also introduced the Thailand Digital Valley (TDV) project in Chon Buri, which can support tech companies from around the world in designing, developing and testing their technologies and innovations.

TDV is in the third phase of expansion with 40,000 square metres of space for tech testing, development, showcases and R&D.

The third phase will see the development of the Digital Innovation Centre, which will house labs for 5G tech, AI, IoT, virtual and augmented reality and cloud as well as a design centre for large tech firms and startups in the region.

The third phase is expected to be completed within two years.

According to Mr Nuttapon, investors in relevant digital industries, such as digital services, smart devices and software, would be eligible for income tax exemption for 13 years, based on conditions stipulated by the Board of Investment.

Mr Yasuo pointed out the MIC and Depa have long engaged in cooperation in various aspects, including organising the "INNOvation" project that allows participants to initiate ideas to address problems of concern. The project has been carried out for a decade.

The project will be adjusted to focus more on innovation development for startups and knowledge exchange.

In August, the MIC and Depa signed a memorandum of understanding for cooperation in tech and digital innovation development, including knowledge exchange between relevant stakeholders, such as universities, companies and communities.