Reduced to rubble: Rescuers work to clear debris from the collapsed building at Siam Beach Koh Chang in Trat. Right, the last woman to be rescued.

TRAT - Safety inspectors will check every hotel on Koh Chang following the collapse of a building at Siam Beach Koh Chang on Saturday which claimed the life of a Thai tourist and injured five others.

The five injured were buried in the collapse of the two-storey building and it took rescuers four hours to get them out. The dead tourist was identified as Kotchakorn Thammachak, 37.

Trat governor Channa Iemsaeng yesterday instructed district and municipal authorities to jointly inspect the safety of other buildings on the island.

If they were found to be unsafe, the hotels would be closed. Koh Chang mayor Sanya Kerdmanee had earlier briefed him on the collapse of Siam Beach Resort building which is in tambon Koh Chang Tai.

Mr Channa said an initial inspection found that the collapsed building had been built over a waterway or a swamp. During heavy downpours, the soil beneath the building gradually eroded, leading to the collapse.

Koh Chang municipality has ordered Siam Beach Koh Chang to be closed indefinitely and declared the area a disaster zone.

Mr Sanya said the resort contained a few similar buildings to the one that collapsed and authorities would have to inspect each for safety before the premises are allowed to reopen.

A source said 75% of Koh Chang was national park and many resorts on the island were illegally built. There had been no legal inspection of them by the authorities.

The collapsed building was one of six two-storey structures constructed near a foothill.

It came down at about 7am and local police, administrative officers and rescue workers were quickly on the scene.

About 11.30am, they were able to extract all five of the people trapped in the rubble, including a three-year-old boy.

All the injured were admitted to Koh Chang Hospital.

The hotel's executives said they would cover all medical costs for the injured. 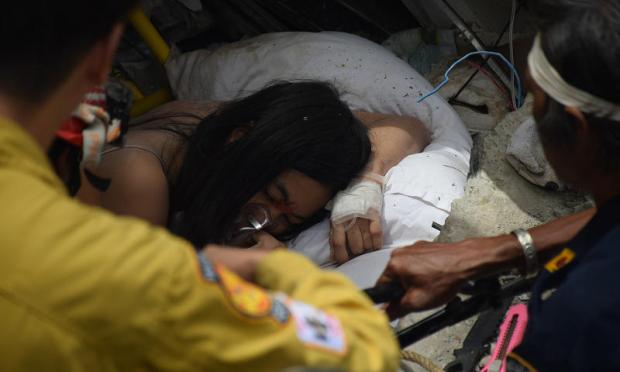