Pol Col Montree Paencharoen, deputy commander of the Natural Resources and Environmental Crime Division, shows one of the tiger cages during the raid in Kanchanaburi province on Tuesday. (Photo by Piyarach Chongcharoen)

KANCHANABURI - Authorities found four tigers in a well-fenced property in Muang district on Tuesday and suspected it might have been used as a slaughterhouse by the Tiger Temple.

There were several houses in the compound, as well as two other empty cages, big freezers, knives, tiger food storages and equipment believed to be used in tiger transport.

They said the tigers belonged to Thawat Khachornchaikul, the 68-year-old owner of the property. Mr Thawat was a native of Bangkok and his wife was from Kanchanaburi. They said he had kept the tigers for a decade.

Pol Col Montree Paencharoen, deputy commander of the Natural Resources and Environmental Crime Division, said during the raid that the property was probably a source of trade in wildlife, especially tigers. It might have also functioned as a transit place and slaughterhouse.

The investigators believed the property was connected to Wat Pa Luangta Maha Bua Yannasampanno, better known as Tiger Temple, in Sai Yok district. DNA tests would prove if the four discovered tigers had anything to do with other tigers, including three lost ones at the temple, the deputy commander said.

The Tiger Temple not only kept tigers for display to tourists but also traded live and butchered tigers aged 1-2 years and talismans made from tiger parts, said Pol Col Montree, who assured the investigators were making progress in the case. 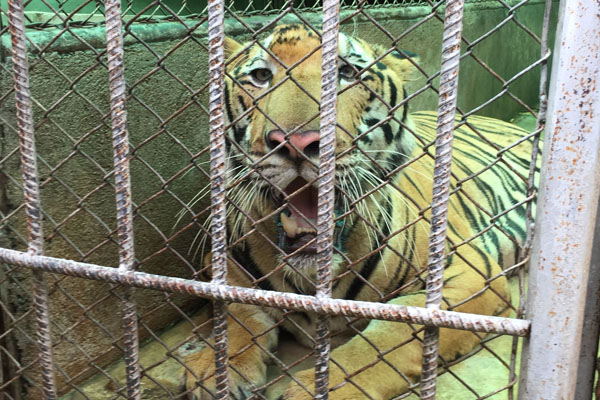 A tiger found at the property (photo by Piyarach Chongcharoen)