Pol Col Charan Roengtham, deputy chief of Chiang Rai police, shows a package of speed pills with the new logo during a media briefing on Thursday following a search of a Bangkok-bound tour bus in Phan district on Wednesday night. Two boys were arrested for possession of the drugs. (Photo by Chinpat Chaimon)

CHIANG RAI - Two boys were arrested for possession of 200,000 methamphetamine pills in small packages stamped with a car-maker's name and emblem after a tour bus was stopped at a police checkpoint in Phan district.

The two youths, aged 12 and 15 years, were taken to a media briefing at Phan police station on Thursday. Their names were withheld because of their ages.

Local police stopped the Mae Sai-Bangkok interprovincial bus for a search at Pukaeng road checkpoint on Phahon Yothin Road along the Chiang Rai-Phayao route in tambon Mae Yen around 8pm on Wednesday.

While searching the bus they noticed the two boys acting suspiciously. When asked where they were going, they replied falteringly. The police then asked to conduct a body search, but found nothing illegal.

The officers then checked their bags, which were in the luggage compartment of the bus, and found 50 packages of speed pills, each containing 2,000 tablets, and a small plastic bag containing 350 grammes of crystal methamphetamine hidden in the blue travelling bag of the 12-year-old boy. They also found 50 packages, each containing 2,000 speed pills, and the same amount of crystal meth in the 15-year-old's red travel bag.

The seized packages were stamped with a new logo, similar to a prominent car maker's emblem. It is the first time police have seized drugs packaged with this stamp. In previous operations, packages containing illicit drugs were stamped with an image of two holding hands or with No 999.

Police would look into the source of the seized drugs.

During interrogation, the two suspects told police they were hired by two men, identified only as Art and Boy, to pick up the two bags at Chiang Rai bus terminal 2 in tambon San Sai, Muang district. The bags were to be taken to Mor Chit bus terminal in Bangkok. If the job was successful, they were to be paid 150,000 baht, the suspects said. They had received 4,000 baht as an advance  payment from the two men.

Police charged the suspects with having illicit drugs in their possession with intent to sell. They were held in police custody for legal action. Authorities were hunting down Mr Art and Mr Boy.

Last month, two tribal teenagers were caught and 400,000 methmphetamine pills seized from their bags on a Bangkok-bound bus stopped for a search in Chiang Rai’s Mae Lao district. 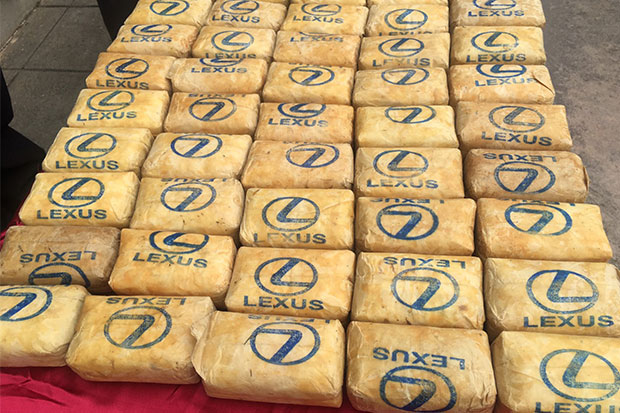 A total of 100 packages bearing a new logo and containing 200,000 speed pills were seized from the bags of two boys during a search of a Bangkok-bound tour bus in Chiang Rai's Phan district.  (Photo by Chinpat Chaimon)