Phra Wisutthi Sarathera, or Luang Ta Chan, 61-year-old abbot of the Tiger Temple, appears briefly on a buggy behind its gate without any direct explanation to reporters on its tiger business in Sai Yok district, Kanchanaburi, on Thursday. (Photo by Piyarach Chongcharoen)

The abbot of the Tiger Temple had nothing to do with the alleged abuse and illegal trading of tigers and tiger parts, according to his representatives who have put the blame squarely on temple staff and officials.

The message was conveyed by the temple's lawyer and a former politician at a news conference at the front gate of the temple in Kanchanaburi province on Thursday.

Although the temple had said earlier that abbot Phra Wisutthi Sarathera would brief the media, he was seen only for a moment on a golf cart, feeding animals behind the secured gate of his temple in Sai Yok district before and afterwards.

The 61-year-old abbot, also known as Luang Ta Chan, told Thai and foreign reporters that he was ill. Temple staff prohibited outsiders from entering the temple and took snapshots of reporters.

On behalf of the abbot, former Thai Rak Thai MP Siri Wangboonkerd and lawyer Saiyud Pengboonchu said the abbot had a heart disease and it was inconvenient for him to speak to reporters.

They denied reports that the Tiger Temple or Wat Pa Luangta Maha Bua Yannasampanno was involved in wildlife trafficking.

"The recent issues and bad publicity faced by the temple were attempts to frame the abbot, although the temple's business was run by its foundation and the abbot had nothing to do with it," they said.

The senior monk only offered the temple as a place for tigers to live in and arranged for their food, his representatives said, adding the tigers were supervised by veterinarian Somchai Wisetmongkolchai, who had done the job for 17 years.

The veterinarian revealed the disappearance of three tigers at the temple after he resigned and later the Department of Natural Parks, Wildlife and Plant Conservation came to illegally take all of the tigers from the temple, the representatives said.

They also mentioned the first seven tigers at the temple that wildlife officials had left there 15 years ago.

They were referring to the first seven tigers the temple had raised in 2001, allegedly at the behest of villagers because they were wounded. Wildlife officials at the time came and decided the big cats needed to be impounded. However, the authorities lacked the means to move or take care of the big cats so they asked the temple to keep them on their behalf. Their numbers had grown to 147 at the last count in 2015.

The temple's representatives said at Thursday's briefing the department should have waited for a court order before moving them as it had been seeking compensation for keeping the tigers.

They claimed the big cats had been well taken care of there. The relocation could become a burden on department officials, caused keepers at the temple to lose their jobs, ended the temple's status as a tourism landmark of Kanchanaburi and tarnished the reputation of the temple, they said.

"The abbot had nothing to do with the carcasses of tigers, tiger cubs and talismans made from tiger parts. He only received reports of tiger births and deaths there and residents at the temple made the talismans," the representatives said, referring to 70 carcasses of cubs and about 2,000 tiger talismans found at the temple.

They also said that the temple's management organised tiger shows to tourists in order to raise money for their care and pay for temple buildings. "The temple could do so because there was no contract between it and the department that prohibited the business."

The tiger skins and talismans belonged to two residents at the temple and they had hidden some of the objects in the abbot's residence to avoid prosecution, said the temple's lawyer.

Three monks of the temple also knew nothing about the objects as two arrested temple workers had invited them to board their vehicles carrying the objects, the representatives said. One of the monks is the secretary to the abbot.

On the allegation that the temple encroached on more than 900 rai of public land, the representatives said responsible officials should conduct an investigation and take legal action against wrongdoers. 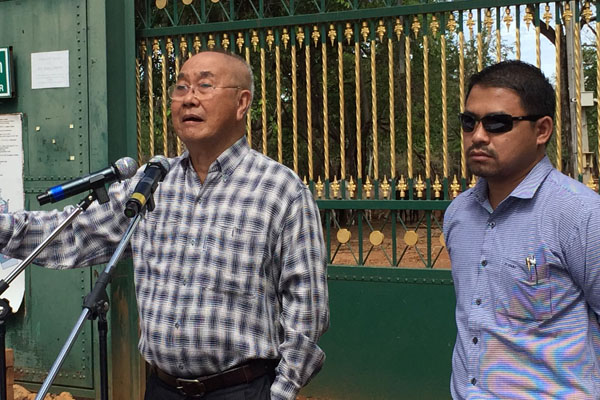 Siri Wangboonkerd, left, and lawyer Saiyud Pengboonchu speak on behalf of the Tiger Temple's abbot in front of the temple's gate on Thursday. (Photo by Piyarach Chongcharoen)