An electricity pole rising up through the stairway of a new pedestrian bridge was quickly removed on Monday after the issue went viral on the social media.

The Metropolitan Electricity Authority said on its Twitter account that the pole, in front of Thananan housing estate on Ratchaphruek Road in Muang district of Nonthaburi, was being relocated away from the stairway, and the high voltage power line along with it.

The work would be completed by Tuesday, the MEA said, and apologised for what happened.

The location of the utility pole, which partially blocked the stairs, sparked heated comments about the construction of the  associated pedestrian walkway. 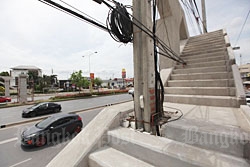 The stairs for this new pedestrian bridge were built around this annoying power pole.. (Photo by Wichan Charoenkiatpakul)

It was built for the Rural Highways Department, to make it safer for people to cross the main road.

Manus Singsanga, the rural highways provincial office chief, said the MEA had been asked in July last year  to relocate the pole so the department could build the footway.

The  firm contracted to build the bridge could not delay any longer because it could be fined for not finishing the job on time -  so decided to build the stairway around the pole, he added.

The construction firm was reported to be Sitthiruek Civil Engineering Co and the bridge cost 4.2 million baht. The company could not be reached for comment despite several attempts by the Bangkok Post.

Nonthaburi governor Nisit Chanthasomwong said he had ordered the MEA to immediately move the utility pole after nearby residents filed a complaint, and before it became an issue on social media.