Justice Minister Paiboon Koomchaya has proposed that <i>ya ba</i> (methamphetamines) be taken off the dangerous illicit narcotics list and put under the normal drugs category as current measures to suppress the drugs have failed.

However, if and when the drugs are to be taken off the list, all agencies will have to work out measures to ensure that the distribution, sale and use of the drugs are strictly controlled, Gen Paiboon said.

He made the proposal Wednesday at a meeting which discussed the results of the 2016 UN General Assembly Special Session on Drugs (UNGASS), adapting the recommendations to deal with drug problems in Thailand. The Supreme Court president Veerapol Tungsuwan was a speaker at the meeting and he echoed Gen Paiboon's opinion.

Addressing the meeting, Gen Paiboon said the world has fought a war on drugs over the past 28 years, but achieved little. Several countries have now changed their approach to dealing with drugs and have considered how to adapt and live with drugs, instead of continuing the traditional approach. 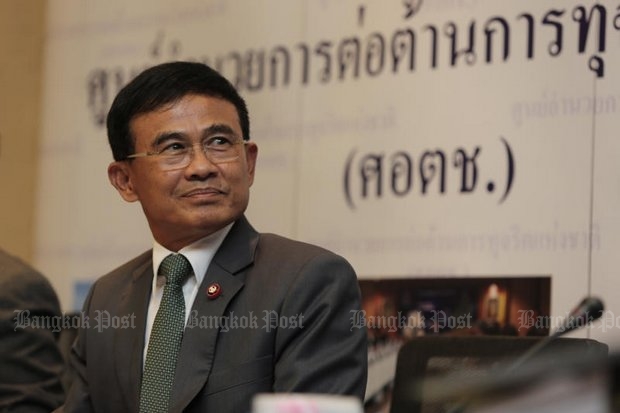 "The world has now surrendered to drugs, and has come to think of how to live with drugs. It is like a man suffering from cancer and having no cure and he has to live a happy life with the cancer," Gen Paiboon said.

Numerous countries have discussed solutions to the drug problem in terms of looking after drug users and safeguarding their rights, the minister said.

Gen Paiboon said Thailand is among several countries which supports the idea of a proportionate punishment for drug offences involving the use of amphetamine-type stimulants, as well as alternatives to imprisonment.

Many countries have adopted such ideas, but Thailand has failed to implement them because the country's drug laws still have certain limitations and need to be amended to accommodate these measures, Gen Paiboon said. A bill was drawn up to reform the system of drug laws and has received the endorsement of the cabinet. The bill will be tabled to the National Legislative Assembly for deliberation, Gen Paiboon said.

The bill would allow the courts of justice to determine whether a drug offender deserves punishments such as a jail term or a fine that is less severe than the minimum penalties stipulated by law. He said the status of methamphetamines or ya ba should be changed from a severe to a normal drug. Citing medical studies, Gen Paiboon said methamphetamines's effects on health are less harmful than those of alcohol and cigarettes.

The Justice Ministry will hold discussions with the Public Health Ministry, the courts of justice and prosecutors, and other agencies to amend the law and find ways to take methamphetamines off the narcotics list.

Mr Veerapol told the meeting that Thailand has failed in its bid to use harsh legal measures against drug abuse and drug trafficking. Despite the harsh measures, the drug problem has continued unabated. More than half of about 270,000 legal cases pending in court are drugs-related, Mr Veerapol said. The Supreme Court president also admitted that several agencies, including the courts of justice, have still failed to work together to address the drug problem.

Under the law, drug addicts are now treated as patients as part of a move to improve measures to deal with the problem, he said.

However, a drug user who possesses 15 methamphetamine pills or more is considered a drug dealer and is liable for the same punishment imposed on drug dealers, Mr Veerapol said.

Prateep Ungsongtham Hata, the Duang Prateep Foundation's secretary-general, warned that if methamphetamines are removed from the narcotics list and put in the normal drugs category, there will be an increase in the drug supply and an increase in demand.

Their prices may drop due to higher competition, said Ms Prateep, who has been battling illicit drugs in the Klong Toey slum community in Bangkok.

Ms Prateep, a 1978 Ramon Magsaysay Award winner, said she wanted to see Gen Paiboon come up with plans to educate Thais about the dangers of methamphetamine abuse.

She also disputed Gen Paiboon's claim that methamphetamines are less harmful than alcohol and cigarettes.

HONG KONG: Media tycoon Jimmy Lai was jailed for 12 months on Friday along with four other veteran democracy activists for helping to lead one of the city's biggest-ever protests.

Twenty-nine people died and 310 injured in 313 road accidents on Thursday, the sixth day of the seven-day Songkran road safety campaign.

WASHINGTON: At least eight people were killed in a shooting in the US city of Indianapolis by a gunman who is believed to have then killed himself, police said.