Officials from the Department of Special Investigation are seen talking with monks inside the grounds of Wat Phra Dhammakaya in Pathum Thani on Thursday morning. (Photo by Pattarapong Chatpattarasill)

PATHUM THANI -- Department of Special Investigation (DSI) officials have arrived at Wat Phra Dhammakaya in Khlong Luang district with a search warrant in a bid to arrest Phra Dhammajayo, the temple's abbot, on charges of money-laundering and receiving stolen property, media reports said.

The DSI officials arrived at gate No 7 of the temple at 9am.

Under the court warrant, they are authorised to search all buildings and structures in the 196-rai compound to look for and arrest Phra Dhammajayo.

After presenting the search warrant to temple staff, the officials went through the steel barricades in front of gate No 7.

They were reportedly led to a reception room for negotiations.  No reporters were allowed inside.

Pol Lt Gen Chaiwat said the police were on standby to support the DSI if requested.

It was initially believed the DSI would execute the search warrant and start moving into the temple between 8am - 9am.

Pol Lt Col Somboon Sarasin, deputy director-general of the DSI, said on Wednesday that, according to the plan, the DSI would enter the temple via gate No 7.

Pol Gen Srivara said that, according to reports reaching him, there were about 8,000 Dhammakya disciples wearing white meditating  inside the temple.  He said anyone who obstructed the operation would be arrested.

About 9.25am, Phra Sanitwong Wutthiwangso, director of communications for Wat Phra Dhammakaya,  said he was willing to cooperate with the DSI to let officials search the compound.

The monk insisted Phra Dhammajayo was still receiving medical treatment at the temple.

Pol Maj Suriya Singhakamol, deputy DSI chief, said after meeting Phra Sanitwong and another temple representative, that his team has already shown the search warrant to the temple representatives. They had agreed to cooperate and allow officials to search for and arrest the suspect.

However, supporters of the monk were refusing to make way for DSI officials so they could search for him, television news reported.

The temple grounds were sea of white, with seated praying devotees refusing to move.

Phra Dhammajayo is wanted under an arrest warrant. The 72-year-old abbot is accused of involvement in money laundering and receiving stolen property worth 1.2 billion baht in connection with the 12-billion-baht embezzlement at Klongchan Credit Union Cooperative. He has denied the charges through spokesmen. 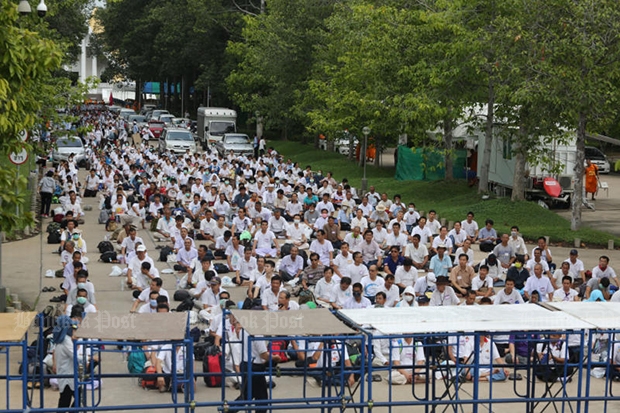 Supporters of Phra Dhammajayo, clad in white, block the road into the temple. (Photo by Pattanapon Hirunard)

The country registered 18 more Covid-19 fatalities and 1,917 new cases during the previous 24 hours, the Centre for Covid-19 Situation Administration (CCSA) announced on Tuesday.