PATHUM THANI -- Twenty-eight drivers were detained on Wednesday for operating vans registered for private use as public transport services.

The arrests were made in the latest crackdown on illegal passenger vans, in this case  operating from in front of Future Park Rangsit shopping centre in tambon Prachathipat of Thanyaburi district.

The 28 vans were working the Rangsit - Nakhon Nayok route.

Lt Col Seksan Sangsapphan, commander of the 2nd Cavalry Battalion, said the operation followed complaints from commuters about the illegal vans, including accusations of careless driving  and drivers being rude to passengers.  The complainants were afraid that no one would take responsibility if there were accidents involving injuries, loss of lives and property.

The 28 drivers were taken for questioning at the Rice Research Centre in Thanyaburi district, and their documents were examined.

They were charged with illegally providing transport services without a permit from the transport registrar.  If found guilty, they would be liable to a maximum prison term of five years and/or fine of 20,000 - 100,000 baht under the provisions of the Land Transport Act. Their vans were seized. 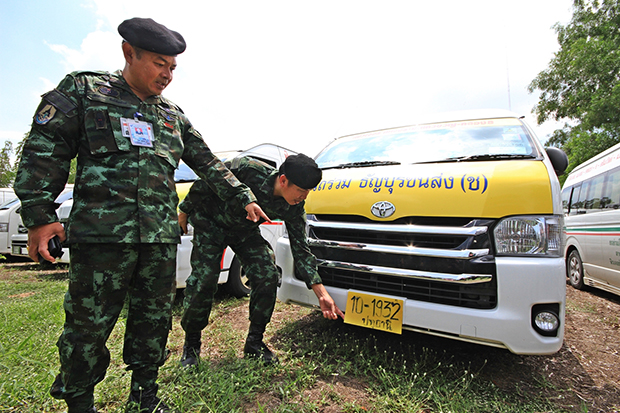