Heavy rain could not deter thousands of Myanmar workers from greeting their idol Aung San Suu Kyi at a market in Samut Sakhon on Thursday.

They braved the heavy rain and chanted  "Me Suu" (Mother Suu) as their icon reached the market from Bangkok.

She waved to her compatriots before going inside the meeting hall to talk to their representatives. 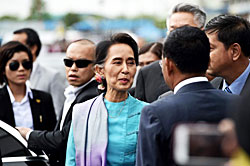 The de facto Myanmar leader said in the meeting room that she hoped for better understanding between people of the two countries.

She likened Myanmar workers to guests of Thailand and urged them to talk with their employers to find solutions to any issues that may arise.

"When living together, it is normal that some little difficulties or problems may occur, but talking over them is the best solution," she said.

She also promised the workers that she will discuss labour welfare with the Thai government.

Ms Suu Kyi arrived from Yangon earlier on Thursday for a three-day visit in what was her first trip after the National League for Democracy Party won a landslide victory in elections in November last year. She was appointed to the Myanmar cabinet in March before she was given an additional role as state counsellor in April. She was welcomed at Suvarnabhumi airport by Deputy Prime Minister Somkid Jatusripitak.

The NLD leader came to Mahachai in 2012 to meet Myanmar migrants while on a trip to Thailand.

She will meet Prime Minister Prayut Chan-o-cha on Friday with refugees, labour issues and development projects between the two countries on the agenda.

Ms Suu Kyi will deliver a keynote speech on the "Myanmar, Asean and the World" forum at the Foreign Ministry before going to Government House.

Her plan to visit the Tham Hin refugee camp in Suan Pheung district in Ratchaburi by helicopter before wrapping up the visit on Saturday has been cancelled due to weather factors.

HONG KONG/SINGAPORE: A travel bubble between Hong Kong and Singapore due to open on May 26 has been postponed for a second time, officials said on Monday, after a spike in cases in Singapore derailed the plan for quarantine-free travel between the financial hubs.