Myanmar State Counsellor Aung San Suu Kyi yesterday urged Myanmar migrant workers in Thailand to show their love and honesty toward their host country as the Nobel Peace Prize laureate received an overwhelming welcome from her compatriots who turned up in droves to catch a glimpse of their national hero.

She also called on Myanmar workers in Thailand to comply with Thai laws. She is scheduled to meet Prime Minister Prayut Chan-o-cha today at Government House. Ms Suu Kyi, along with her delegation, arrived at Suvarnabhumi airport on a three-day state visit at 11.45am yesterday. Deputy Prime Minister Somkid Jatusripitak received her on behalf of the Thai government.

Many Myanmar migrant workers in Thailand were waiting in eager anticipation for her arrival as they hope their democratic icon and national heroine will bring reforms to Myanmar and help improve their lives back home.

From the morning onward, thousands of Myanmar workers in Thailand, particularly in coastal Samut Sakhon and nearby provinces flocked to the Talay Thai seafood market in Samut Sakhon to welcome Ms Suu Kyi who was scheduled to meet them in the afternoon.

However, an incident occurred when about 200 Myanmar migrants were forced by officials to leave the market compound, as they said the hall in the market where Ms Suu Kyi would meet their representatives was limited to only 500 selected Myanmar workers who had been assigned seats.

Many others were unhappy they were not given a chance to see her as they were kept behind barricades outside the venue. They then tried to block a motorcade carrying the selected Myanmar workers from entering the compound. Police and local authorities had to rush in to restore order and were able to successfully calm the crowd.

About 4.15pm, Ms Suu Kyi arrived at the market. When her motorcade passed the gate, Ms Suu Kyi opened the car window and waved to the workers to follow, prompting many of them to burst through the barricades, spilling over the entrance gate of the compound in front of the hall.

However, only about 300 Myanmar workers were actually present at the hall, so officials had to remove the other 200 seats to make the hall appear full. 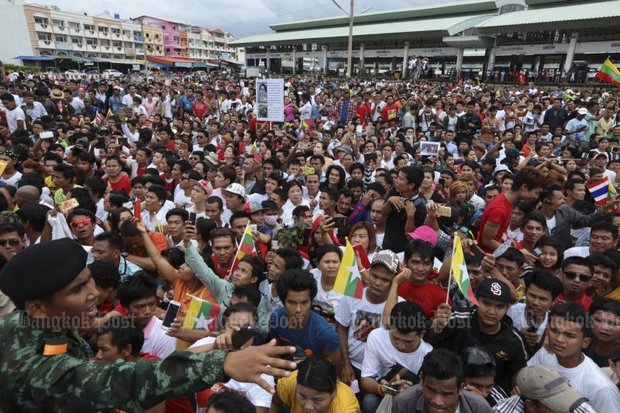 At Talay Thai seafood market, the weather cleared for Mrs Suu Kyi, and the crowds were even more enthusiastic. (Photo by Patipat Janthong)

Addressing the gathering, Ms Suu Kyi, who is also Myanmar's foreign minister, said that her Myanmar compatriots were the first group of people she wanted to meet during the visit. She said working in Thailand had given some security to Myanmar workers but also led to difficulties and her government would coordinate with Thailand to help them.

"Myanmar workers in Thailand are guests of their host country; therefore, you should love, be honest and behave well toward the hosts," Ms Suu Kyi said in Burmese.

When they encounter problems, they should talk them through with the Thai people, Ms Suu Kyi said, stressing the need for Myanmar migrants to follow the laws of Thailand.

"Small problems may sometimes occur, but [Myanmar migrants and Thais] should love each other and be united so we can live together for a long time and continue to improve cooperation between the two countries," Ms Suu Kyi said.

The Myanmar government will also expedite efforts to verify the nationality of all Myanmar workers and will see to it that illegal workers become legal, she said.

There are about 1.4 million legal Myanmar workers in Thailand and the number of Myanmar migrants in the country might reach 2 million if illegal workers are included, according to local officials.

Following the speech, Ms Suu Kyi came down from the stage and talked to Myanmar workers in the hall.

Some workers also complained that brokers charged them expensive fees to apply for passports and work permits.

Ms Suu Kyi said she will alert the relevant authorities to solve the problem. She also warned them not to use the services of brokers to obtain any documents.

After the meeting, she left in her motorcade and waved to the Myanmar workers waiting outside amid heavy rainfall.

Workers who could not enter the hall were dismayed that they were sidelined.

A 45-year-old Myanmar female worker said: "I have been waiting to see Ms Suu Kyi since 6am, but officials told me to get out of the hall. They said the hall was already full."

Some said that workers who were allowed inside the hall were mostly legal workers from large factories while those waiting outside were workers who still have problems.

Minnaing, a 38-year-old Myanmar worker in Samut Sakhon said: "It is unfair. All Myanmar migrants are equally proud of our mother [Ms Suu Kyi]."

Kha Kha Hlaing, a coordinator from the Myanmar embassy, said she was not permitted to enter the hall, either.

Workers who just will not cooperate are frustrating efforts to control the spread of Covid-19 clusters in Bangkok, a senior government spokeswoman says.

PHNOM PENH: A critically endangered giant barking deer has been spotted in Cambodia for the first time, in a boost for the country's wildlife preservation efforts, officials said on Friday.