Bangkok governor MR Sukhumbhand Paribatra drew much mockery when he waded into the flooded streets last week and the water was higher than his brilliant-yellow rubber boots. (Bangkok Post file photo by Patipat Janthong))

Bangkok governor Sukhumbhand Paribatra concedes it is impossible for City Hall to dredge all canals and waterways to improve the city's drainage capacity in time for the rainy season.

He was commenting while presiding over city canal-dredging work which kicked off Wednesday as part of celebrations of both the 70th anniversary of His Majesty the King's accession to the throne and the 84th birthday of Her Majesty the Queen.

The governor described as "impossible" the task of dredging all canals and waterways in Bangkok to make them fully ready for drainage because many canals, even after dredging, clog up with rubbish and water hyacinth quickly after 10 days.

"I don't know how they attempted to deal with excess rainwater before this. But under my supervision, canal dredging is carried out by the Department of Drainage and Sewerage and district offices all year-long, not just in these past two months," he said.

MR Sukhumbhand, however, admitted the Bangkok Metropolitan Administration (BMA) did not have sufficient staff or equipment to dredge the canals frequently enough.

After recent flash floods in Bangkok, the government told the BMA to dredge some 70 canals with a combined length of about 90 kilometres.

Only some of the 70 canals are being dredged so far.

The canal-dredging drive is expected to be completed by June 9 next year. 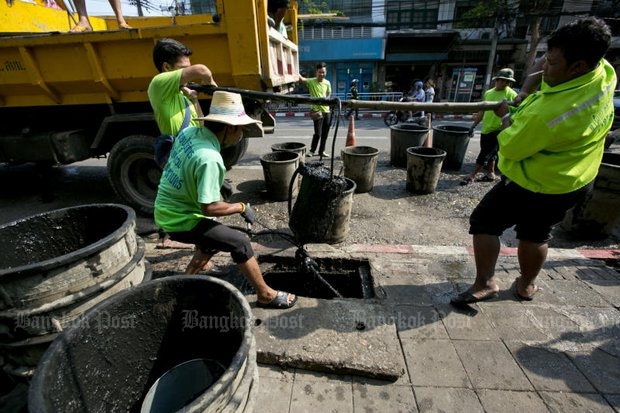 The governor acknowledged public scepticism about the BMA's ability to dredge canals so the city's drainage system is robust enough to cope with rainy season floods.

"And now the BMA is conducting this canal dredging activity, it doesn't mean the BMA has only just begun the task. Canal dredging has been completed in several areas, but like I said the work needs to be done regularly," he said.

Rubbish is one of the main causes of flooding in the capital, and the amount of rubbish dumped by the public is substantial, said Siriporn Piyanawin, director of the Department of Environment Quality Promotion's Policy and Planning Division.

The measures range from campaigning for the public to adopt a zero waste idea to devising new approaches to deal with accumulated rubbish, she said.