Some big cats from Tiger Temple in trouble
Thailand
General

Some big cats from Tiger Temple in trouble

A tiger samples raw chicken at the Khao Prathap Chang Wildlife Breeding Centre in Ratchaburi on Friday, a month after being taken from the Tiger Temple in Kanchanaburi where the big cats used to eat cooked food, according to wildlife authorities. (Photo by Patipat Janthong)

A tiger rescued from the notorious Tiger Temple has died and some of the other 147 big cats are struggling to adjust to their new surroundings and a diet very different from the cooked food they used to eat, say wildlife officials.

Officials and veterinarians from the Department of National Parks, Wildlife and Plant Conservation visited the big cats at its Khaozon and Khao Prathap Chang wildlife breeding centres in Chom Bung district of Ratchaburi on Friday. While there, they observed that many of the animals were agitated and growling frequently.

Veterinarian Nachamon Parnphet at the Khaozon facility said one tiger was sick with breathing difficulties and staff were keeping a very close watch on each tiger as they attempted to gradually familiarise the big cats with raw food.

Keepers are also providing the tigers, mostly aged 3-8 years, with vitamins to relieve their tension.

Adisorn Noochdumrong, deputy director-general of the department, said the tigers were generally adapting well to their new environment, food and keepers but some big cats remained stressed, rarely ate and needed close watching.

Some tigers were not eating at all and had to be tranquillised and examined, he said during the visit. They were being given saline solution and food pellets because they used to eat cooked food at the temple and were rejecting the raw chicken served at the centres, he added.

The dead tiger was six years old and was among 10 big cats moved from the Tiger Temple in Kanchanaburi on Jan 28 this year. It died of a gastric and intestinal infection that had started at the temple, Mr Adisorn said.

The extremely hot weather earlier this year might also have been a factor leading to the death, he said.

The rest of the tigers were in good conditions and receiving close care. The department did not plan to relocate the tigers again but public and private zoos could inquire about them, Mr Adisorn said.

The department is seeking permission to revise its budget to pay for the tigers' care. The big cats cannot be released into the wild because they are not indigenous to Thailand, he said.

The saga of the Tiger Temple began when seven tigers were allegedly found injured in the wild by villagers who later asked monks to take care of them. Wildlife authorities in 2001 gave the temple permission to keep the animals as they were unable to take care of the big cats at the time.

The number of tigers at the temple increased over the years to 147 and became the stars of a profitable zoo business and tourist attraction at the temple, also known as Wat Pa Luang Ta Bowa Yannasampanno in Sai Yok district of Kanchanaburi.

After the first lot of 10 tigers were moved out in January and February this year, officials moved 137 other tigers to Ratchaburi a month ago, as allegations mounted of wildlife trafficking, abuse and slaughter.

A large number of tiger carcasses and talismans made from tiger parts were found at the temple while officials were seizing the big cats.

The future of the Tiger Temple is now in doubt, as it also faces charges of forest encroachment. Temple authorities recently appealed to the public for funds to feed as many as 2,000 other animals still on the site, saying that now that its main attractions were gone, it could not afford the feed. 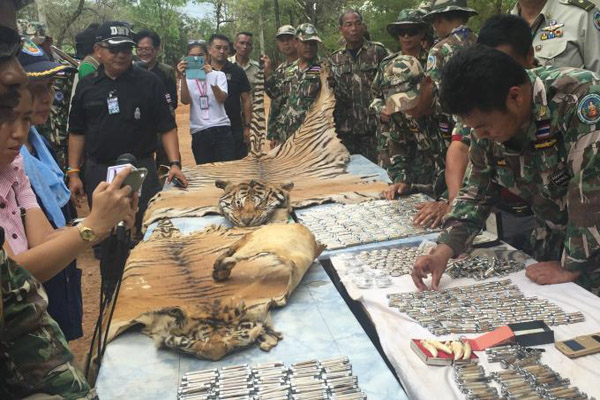 Wildlife officials find tiger skins, carcasses and talismans made from tiger parts at the Tiger Temple in early June. (Photo by Piyarach Chongcharoen) 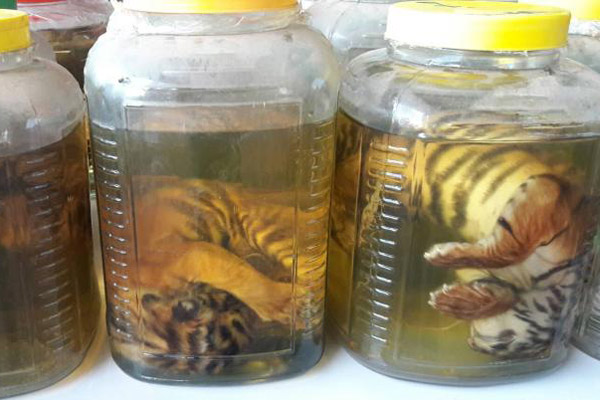