The railway track in adjoining areas of Yala and Narathiwat was hit by improvised explosive devices on Sunday afternoon. (Photo by Abdulloh Benjakat)

Train services in the far South were suspended after two powerful bombs ripped apart a portion of the main southern railway track in adjoining areas of Yala and Narathiwat on Sunday.

Rueso district police were informed about the damage to the rail track at kilometre markers 1064-1065 between Ba Lor station in Raman district of Yala and Rueso station in Narathiwat in the afternoon. No one was injured as no train was passing the area when the bombs exploded.

Officials found two craters under the track, each about two metres deep and two metres wide. The second hole was about one metre away from the first. The blasts twisted a 20-metre section of the track and broke about a dozen concrete sleepers.

Pol Col Ruangsak Buadang, chief of Rueso police station, said fragments of improvised bombs made from explosives-filled 20-kg cooking gas cylinders were scattered around the scene. They were detonated by batteries connected to a wire.

Pol Col Ruangsak said he believed the sabotage was the work of southern insurgents in retaliation for security officials killing two key members of the Runda Kumpulan Kecil (RKK) separatist group in Rueso on Saturday.

The blasts disrupted 14 train services, including express and rapid trains running in both directions between Bangkok and Sungai Kolok.

Tanyongmas stationmaster, Manop Mueanpreecha, said passengers to Sungai Kolok district of Narathiwat had to alight at Yala station and then continue their trip by buses and vans provided by the State Railway of Thaialnd to the end of the line. Trains from Sungai Kolok had to stop at Ban Salo Bukit Yuaerae station.

He said repairmen stationed at Tanyongmas would discuss safety issues with security officers on Monday before beginning repairs to the damaged track. The repairs should take a few days to complete, he said. 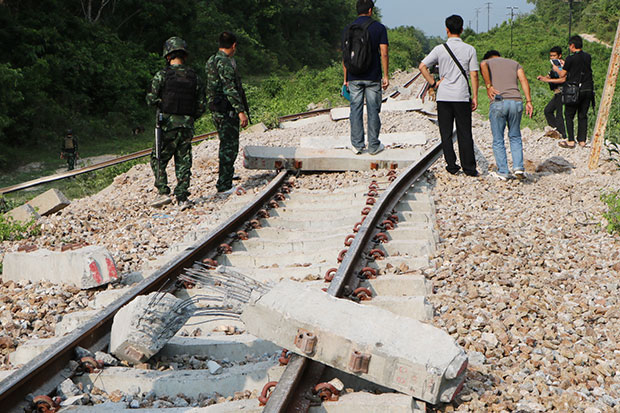