Montha 'Ying Kai' Yokrattanakan, 56, is under investigation for lodging false complaints, and it has emerged she has travelled abroad on an illegal official passport supposedly reserved for state business. (Main photo by Tawatchai Kemgumnerd)

The Crime Suppression Division (CSD) is launching an investigation to find officials who helped "Ying Kai", a woman suspected of lodging false complaints against her former employees, obtain an official state passport.

Pol Col Chakrit said the CSD sent a letter to the Foreign Ministry's Department of Consular Affairs, asking who was responsible for issuing Ms Montha's official passport and which documents were submitted. Officials found to have been involved will be summoned by police, he said.

He added the Pracha Chuen police overseeing Ms Montha's cases against her former employees would testify with CSD authorities today, adding the CSD was in the process of questioning all victims and witnesses and gathering evidence.

The probe found that of the three Pracha Chuen police investigators overseeing Ms Montha's cases, two remained at the station while another had been transferred to Tha Kham station, a source said. 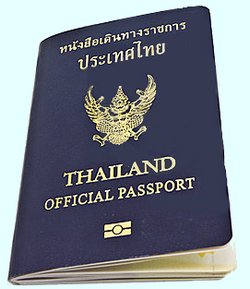 The official passport is for people travelling on official state business, and police believe Ms Montha must have got hers through an influential person. (Passport photos via Ministry of Foreign Affairs)

On June 21, Praphawan Jaikla, 19, and her parents, accompanied by lawyer Songkan Atchariyasap, chairman of the Network Against Acts that Destroy Kingdom, Religion and Monarchy, submitted a petition with the CSD against Ms Montha.

Ms Praphawan said that after she turned down a job Ms Montha offered in Hong Kong, Ms Montha filed a complaint with Pracha Chuen police, accusing her and her family of stealing valuables worth more than 10 million baht while they worked at Ms Montha's home in Chatuchak on March 18 last year. Ms Praphawan denied the allegation.

Other people who claimed to have experienced similar treatment also have lodged complaints with the CSD against Ms Montha.

At least five former employees have faced similar complaints from Ms Montha. One was jailed for one-and-a-half years. She has denied fabricating complaints against former staff.

Also on Sunday, Central Investigation Bureau commissioner Thitirat Nongharnphithak pledged to take action against those in connection with Ms Montha's cases if they were found to have committed crimes including human trafficking.