Disciples of Phra Dhammajayo pack into Wat Phra Dhammakaya in Pathum Thani in mid-June. Authorities consider it as obstruction to an attempted arrest of the abbot. (Photo by Pattarapong Chatpattarasill)

Pathum Thani police are prosecuting followers of Phra Dhammajayo for blocking the Department of Special Investigation (DSI)'s attempted arrest of the embattled abbot and for illegally organising a rally to support him.

Pol Maj Gen Thaworn Khaosa-ard, commander of Pathum Thani police, told reporters on Tuesday that DSI interrogators lodged complaints about the obstruction of their search of Wat Phra Dhammakaya in Khlong Luang district of Pathum Thani in the attempted arrest of Phra Dhammajayo on June 16.

The abbot was charged with laundering money and receiving stolen property in connection with the 20-billion-baht embezzlement at Klongchan Credit Union Cooperative.

Pol Maj Gen Thaworn said police were handling nine cases of obstruction after crowds gathered and vehicles including backhoes and trucks were parked across the gates of the temple, and barbed wire was installed on the fence.

Seven cases concern the blockage of public roads and the seizure of six vehicles. Another case dealt with the use of barbed wire and police plan to press a charge of illegal possession of military warfare equipment.

The other case concerned illegal assembly, the obstruction of DSI officials and assisting a wrongdoer. Police arrested one person and were gathering evidence to arrest more, Pol Majj Gen Thaworn said.

Police also summoned Virasak Hadda, president of the Khlong Sam Tambon Administration Organisation, to hear a charge of organising an unauthorised demonstration at a gate of the temple on May 29 to express support for Phra Dhammajayo. 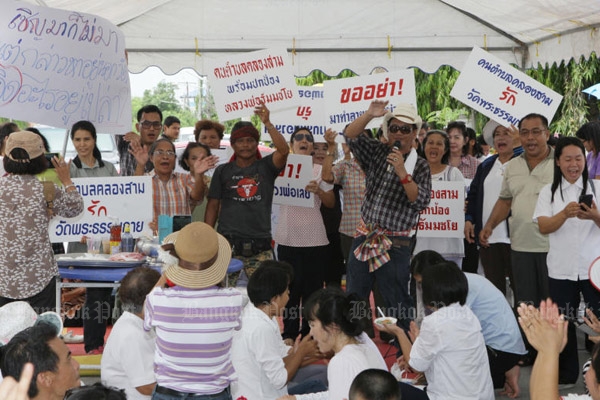 Supporters of Phra Dhammajayo rally in front of Wat Phra Dhammakaya on May 29. Police have summoned the leader of the gathering for prosecution. (Photo by Apichit Jinakul)