The Department of National Parks, Wildlife and Plant Conservation will meet tourism operators in Andaman Sea provinces to discuss ways to control tourist numbers amid concerns an influx of visitors is destroying the environment at marine tourism spots.

He raised concerns about the ecological and environmental impacts on the beach amid the influx of tourists. He said state agencies were running campaigns to drum up tourist numbers without regard for how many visitors can be accommodated.

According to Mr Thon, during this low season, about 5,000 tourists a day pack onto Maya beach, which is just 250 metres long, raising 1.6 million baht a day for the park.

However, the revenue could not be traded with the environmental impact from so many tourists. For example, there are only 14 toilet blocks on Maya beach.

A source at the department said officials will invite tourism operators for talks on how to curb tourist numbers at well-known marine tourism sites in the Andaman sea. The meeting will take place on July 24. "We know tourism is important, but we we have duty to protect and preserve our natural resources for sustainable tourism as well,'' he said. 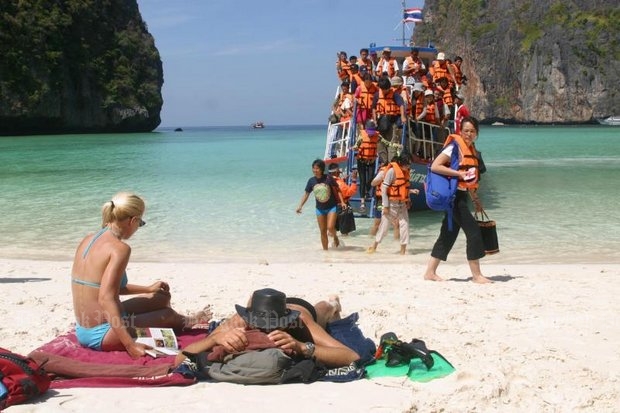 The department has guidelines on how many tourists can visit each site without inflicting ecological and environmental harm, but the reality, it is difficult to accomplish without the cooperation of businesses and state agencies.

The source also said the department has ordered national park authorities to report the number of tourists arriving hour by hour during this week's long holiday to better manage the crowds, particularly at Maya beach.

In the event of too many tourists turning up, authorities have received a guideline recommending tourism operators take tourists to other sights nearby before returning the original destination.

From October last year to May, 1.168 million tourists have visited the Hat Noppharat Thara-Mu Ko Phi Phi Marine National Park, 900,466, or 77%, of whom were foreigners, bringing in income of 361.91 million baht, according to the department.

However, authorities believe the numbers of tourists at Maya beach this week will not be as high as that predicted by Mr Thon due to the onset of the monsoon season.