Most voters undecided on Aug 7 polls

Media and employees mill around Monday at the Chan Wanich Security Printing Co facility in Samut Prakan's Phra Pradaeng district, where ballots are being boxed and sent to polling places. (Photos by Pattanapong Hirunard)

The outcome of the Aug 7 charter referendum is still anybody's guess with the latest findings of a leading opinion poll showing a high number of undecided voters.

Based on a Nida Poll, 59.73% of respondents said they were undecided about how to vote, 32.27% intended to vote "Yes" and only 5.98% said they would reject the draft charter.

For poll graphic, scroll down.

Political observers believe undecided voters will determine the result of the referendum and that their decisions will not be based on the draft's content.

Sathit Pitudecha, deputy leader of the Democrat Party, said there were several factors explaining why the number of undecided voters remains high. One is a lack of information about the draft charter. Another is that these voters are possibly adopting a wait-and-see attitude, just like him.

The Democrat politician said he was assessing the political situation and waiting for a "signal" from the National Council for Peace and Order (NCPO) which has been urged to make the final phase of the referendum campaign an open and inclusive process.

Mr Sathit is a leading member of a group of political parties and civil society organisations that last week issued a statement calling for open talks on the draft constitution and demanded that the NCPO come up with alternatives if the charter is rejected.

He said given the contents of Constitution Drafting Committee chairman Meechai Ruchupan's draft charter, it cannot be accepted, adding it is inferior to the 2007 version, especially as regards education policy and community rights.

"It will be better if the prime minister makes it known to the public if the future charter can be amended if the Meechai draft is rejected. I think this is one of the crucial factors when people go and cast their vote." 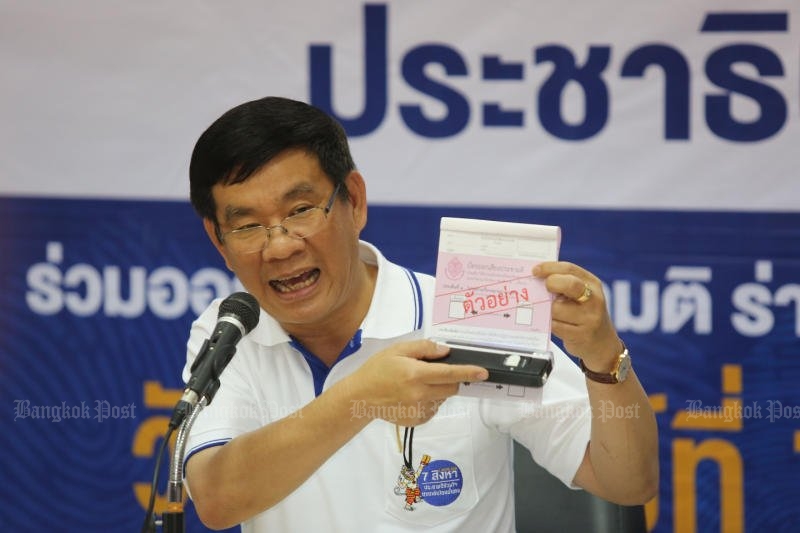 Democrats appear divided over how to vote, he said, adding that most party members are likely to vote for the draft.

Democrat leader Abhisit Vejjajiva, who has voiced strong opposition to the Meechai draft, plans to announce his stance Wednesday.

"Any party member who had joined the defunct People's Democratic Reform Committee's [PDRC] protest and has a different stance to me has freedom to express their stance," Mr Abhisit said, referring to PDRC leader and former Democrat secretary-general Suthep Thaugsuban's stance in favour of the draft charter.

Former Democrat MP for Trang Sathit Wongnongtoey, a key PDRC member, said he believes the poll respondents are undecided because they do not have enough information.

He said the result of the referendum would not reflect opinions on the draft charter, but will reflect voters' political affiliations.

Mr Sathit said critics and supporters of the draft fail to address its contents.

Asked about Mr Abhisit's stance, he said it was possible the party leader may reject the draft.

National police chief Chakthip Chaijinda has ordered police nationwide to work closely with local administration authorities and election officials to prevent any disruptions to the referendum process, he said.

So far, there have been seven cases deemed in violation of the referendum law, but none seems to be related to a campaign against the draft charter, he said.

At this stage, police have found no evidence indicating that the materials are part of the campaign to undermine the referendum. He also assured that public debates on the draft charter are allowed, but organisers must ensure forums do not violate the regime's ban on political gatherings.

At least five people face arrest warrants in connection with the documents, he said. 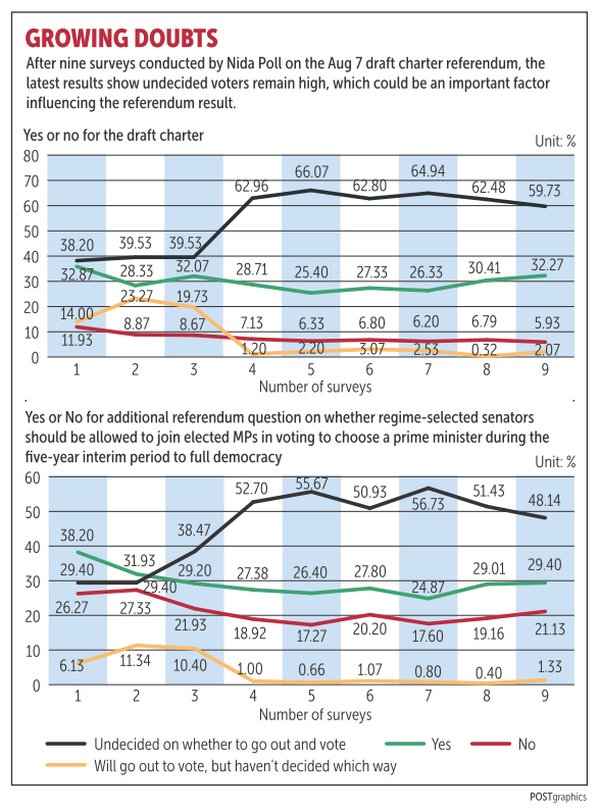