196 tonnes of hazardous waste being sent back to Japan

Industry deputy permanent secretary Sakda Pankla leads senior officials to inspect electronic waste before it is sent back to Japan on Friday. A total of 196.11 tonnes of the hazardous waste was illegally imported to Thailand in falsely declared shipping containers through Laem Chabang port in Chon Buri last year. (Photo by Apichart Jinakul)

CHON BURI - More than 190 tonnes of hazardous electronic and electrical waste will be sent back to Japan on Friday after being illegally imported through Laem Chabang port of this eastern province last year.

Industry deputy permanent secretary Sakda Pankla inspected the 196.11 tonnes of toxic waste on Thursday. He was accompanied by senior officials from the Department of Industrial Works, the Department of Pollution Control, the Customs Department, and Laem Chabang port and cargo terminal operators.

This huge amount of hazardous garbage was seized following an inspection of containers at Laem Chabang port by customs and industrial works officials on Aug 28 last year, Mr Sakda said.

They opened eight containers shipped from Japan and declared to contain scrap metal, copper and aluminum. However, only one of the containers contained goods as declared. The seven others were found to contain electronic and electrical waste, the deputy permanent secretary said. It was the first incident of its kind detected in Thailand.

The Department of Industrial Works will ship the toxic waste back to Japan on Friday. It is expected to arrive there on Aug 7, he said.

Japan’s Ministry of the Environment will take legal action against those involved in exporting the waste to Thailand, Mr Sakda said.

Somkhid Wongchaisuwan, deputy chief of the Department of Industrial Works, said electrical and electronic waste was classified as hazardous under the Basel Convention. Imports of this kind of waste must receive prior permission from the department.

In this case, the importer had falsely declared the goods, Mr Somkhid said. Legal action would be taken against the importer.

Japan had agreed to accept the return of the shipment, he said.

This was also in line with the Basel Convention, to which 183 countries are parties, and a gesture of cooperation between the Thai and Japanese governments in tackling the smuggling of hazardous waste, Mr Somkhid said. 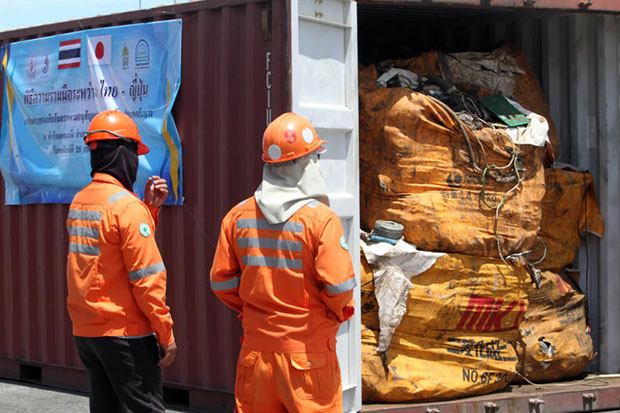 Officials check hazardous electrical and electronic waste seized last year and due to be shipped back to Japan on Friday. (Photo by Apichart Jinakul)