The Transport Ministry has agreed to cap the cost of the Bangkok-Nakhon Ratchasima high-speed train project at 179 billion baht after months of arguments with Beijing on the final figure.

The 12th meeting between Thai and Chinese authorities on the joint 252.5km rail project failed to come up with a clear cost estimate, but "the cost will certainly not be greater than 179 billion baht", Transport Minister Arkhom Termpittayapaisit said after the meeting Thursday.

He said both sides still need to settle two issues -- spending on a feasibility study and future expenses related to training courses for Thai staff. 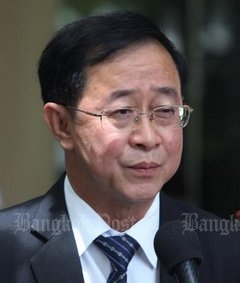 Arkhom: No more than 179 billion baht

Beijing will calculate these costs and present them to Bangkok for consideration, the minister said.

The ministry expects to finalise project details and forward them to the cabinet for a final say "as soon as next month", Mr Arkhom said.

Differences in cost estimates have been an issue in the lengthy talks as Thai officials always have lower figures than those calculated by their Chinese counterparts. Budget debates have made project valuation uncertain and unpredictable.

In May, Mr Arkhom said Chinese authorities estimated the cost at 190 billion baht, a figure disputed by Thai officials who suggested 170 billion baht.

Later in June, Beijing came up with a new, higher figure of 200 billion baht, but Bangkok again had a lower figure, estimating the cost at 180 billion baht, according to a Transport Ministry source.

However, despite these financial differences, both countries have agreed the construction of the first 3.5km section of the rail track should begin in September. This section will connect the Klang Dong and Pang Asok areas in Nakhon Ratchasima's Pak Chong district.

Authorities are confident of a smooth start to construction because the project area belongs to the State Railway of Thailand. As such, authorities do not need to expropriate land. It is also not a mountainous region that would require a more complicated design.

"We plan to use domestic loans and state budget for the construction of this 3.5km section," Mr Arkhom said.

Under the Transport Ministry's plan, the government will first focus on using money from domestic financial sources. Loans from abroad will be sought when it acquires trains, Mr Arkhom said.

The latest survey by Chinese authorities regarding the Pak Chong-Khlong Khanan Chit section found the area was prone to mudslides, so they asked for a postponement of the design to November, Mr Arkhom said. 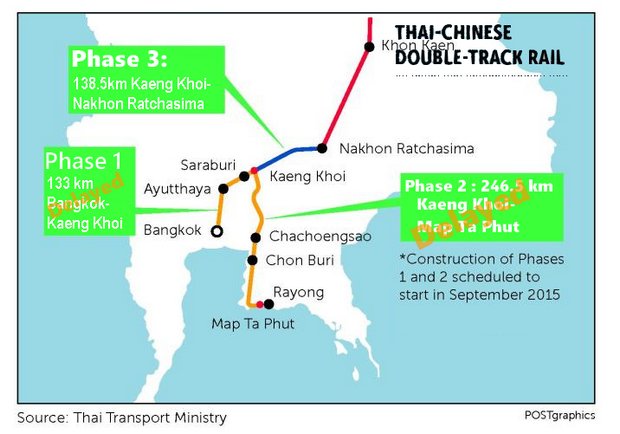