A commando prepares to use a sledgehammer to break down the gate at the house of a suspected money launderer during a raid on Saturday in Bung Kum district of Bangkok. (Photo by the Central Investigation Bureau via Panumas Sanguanwong)

Authorities on Saturday raided the homes of two women charged with stealing millions of baht in shares from the late construction tycoon Chuwong Sae Tang to gather more evidence to press their case.

In a separate operation, raids took place at two properties owned by a woman believed to be involved in money laundering linked to a major drug trafficking network.

The pre-dawn raids were carried out by a 200-member team of police commandos, forensic police officers and Anti-Money Laundering Office (Amlo) officials.

One of the homes targeted, at the Vista Park housing estate in the Ratchaphruek area, belongs to Kanthana Siwathanapol, 27, who faces charges of document forgery, share theft and receipt of stolen property in connection with transfers of shares worth 263 million baht from Chuwong.

Ms Kanthana, a model and caddie, earlier claimed to have been Chuwong's mistress and later gave birth to a child she said was his. The officers seized documents they believe are related to the share case and a Toyota Yaris car. The house has also been seized.

Officers then searched the house of Srithara Promma, 53, and her daughter Uracha Vachirakulthon, 27, at the Bangkok Boulevard housing estate on Rama IX Road. The two women are suspects in the same case with Ms Kanthana. Officers seized more evidence and the house.

The three women along with former politician Banyin Tanpakorn, have been charged with falsifying documents and share theft from Chuwong. Pol Lt Col Banyin is also charged with murdering Chuwong by staging a car accident.

Ms Uracha, a former stockbroker who handled Chuwong's trading account, also claimed to have been Chuwong's mistress. DNA tests have shown that Pol Lt Col Banyin was the father of a baby born to Ms Uracha.

Pol Lt Col Banyin, who served as deputy commerce minister in the short-lived government of Samak Sundaravej, was arrested in Nakhon Ratchasima on June 28 and charged with premeditated murder.

In an earlier, unrelated raid, 100 officers, armed with a court warrant, descended on a two-storey house, situated on a 200-square-wah plot on Nawamin Soi 74 in Bung Kum district. The house belongs to Ms Anothai Chatwarangkul, who is suspected of being involved in money laundering linked to a drug trafficking network.

Police commandos showed the search warrant and used a megaphone to ask those inside the house to open the three-metre-high gate, but they refused.

After almost an hour of unsuccessful negotiations, an officer brandished a sledgehammer and prepared to break down the gate. At that point a housekeeper relented and opened it.

The housekeeper told the officers that the owner had left for Mae Sot district in Tak province. Only six migrant workers, including four men and two women, were inside the house.

The team searched the property and found two BMW sedans, a Toyota Fortuner and a Toyota pickup truck. Forensic officers and Amlo officials later searched the house for documents about links to the illicit drug trade.

Another team searched a one-storey house behind the main home in the compound. It served as an office and warehouse for storing goods. 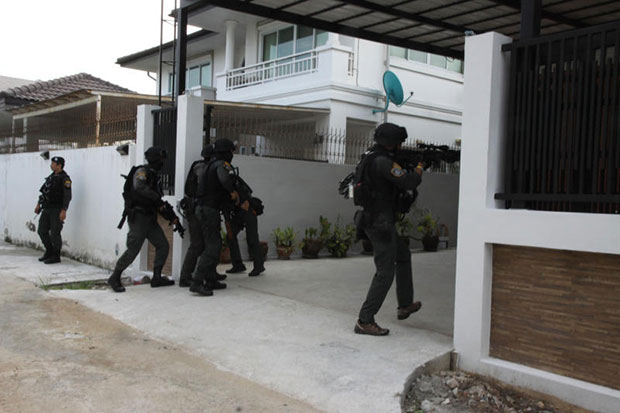 Police enter one of four houses in Bangkok targeted in pre-dawn raids on Saturday. Two of the raids related to a money-laundering investigation and the others took place at the homes of women accused of stealing shares from the late Chuwong Sae Tang. (Photo by the Central Investigation Bureau)