Sinphet Kruaithong of Thailand shows his bronze medal for weightlifting in the 56-kilogramme division at the Rio Olympics. (Reuters photo)

SURIN -- The 82-year-old grandmother of Olympic weightlifting medallist Sinphet Kruaithong collapsed and then died while watching him win a bronze at the 2016 Olympics early on Monday morning.

A crowd of local people had gathered in front of the television at the home of the Thai weightlifter in Ban Phon Muang of Chumphon Buri district of this northeastern province to cheer him on.

While watching the live telecast of the contest from Rio de Janeiro, Brazil, Mrs Subin collapsed during the excitement as Sinphet competed in the 56-kilogramme division.

She briefly regained consciousness about 5 minutes later and was rushed to Chumphon Buri Hospital, where she was pronounced dead about an hour afterward. She did not see her grandson win the medal.

Mrs Chan, Sinphet's mother,  said that while she was saddened by the sudden loss of her mother, she was glad her son had won a medal for his country.

He said in an interview after receiving the medal that he had not expected to do so well in Rio, but been determined to do his best.

He had been downheartening after getting an injury during preparation, but with support from his coach was able to resume training.

Sinphet thanked all his supporters and Surin people and planned to celebrate the medal with three days and three nights of mor lam when he returns home.

He was not aware of the sad news when giving the interview.

Sinphet was the second Thai  to win a medal at the Rio Games. Sopita Tanasan, 22, won a gold medal for weightlifting in the women's 48kg division on Saturday.

Mourning rituals for Mrs Subin were being held at  the house. Her cremation has been set for Wednesday. 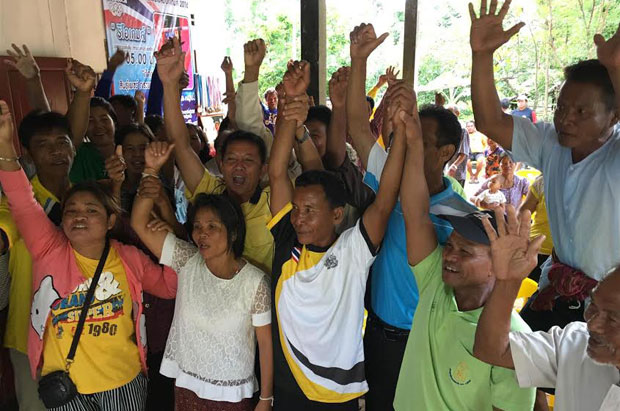 Sinphet's parents (in white tops in the middle) cheer as their son wins a bronze at the Rio Games. (Photo by Nopparat Kingkew)