Pokemon Go players, increasingly referred to as "pokemon zombies", totally absorbed by the game in Pathumwan district of Bangkok, as the telecom regulator threatens to ban the app unless the developer cooperates by excluding restricted areas. (Photo by Nattapol Lovakij)

The National Broadcasting and Telecommunications Commission (NBTC) has threatened to ban <i>Pokemon Go</i> in Thailand if developer Niantic Inc does not cooperate by removing sensitive locations from its game hunt.

The NBTC will send an "official electronic letter" to Niantic on Thursday, requesting it not locate Pokemon characters and items at or around state property, temples, private and dangerous areas, including roads, waterways and railways.

"We will give Niantic until next Wednesday" (Aug 17), said NBTC secretary-general Takorn Tantasith. "If the company fails to comply with our request, we might consider harsh restrictions by banning Pokemon Go in Thailand."

He expected a positive response, saying Niantic had already spared specific areas in some countries from Pokemon-Go characters after receiving similar requests.

The NBTC will officially send an online letter Thursday to US-based Niantic asking it to set four no-go zones for players in Thailand.

The National Legislative Assembly's social committee echoed the feeling that Pokemon-Go should be banned at security-sensitive sites, while proposing that it be promoted at tourist destinations. 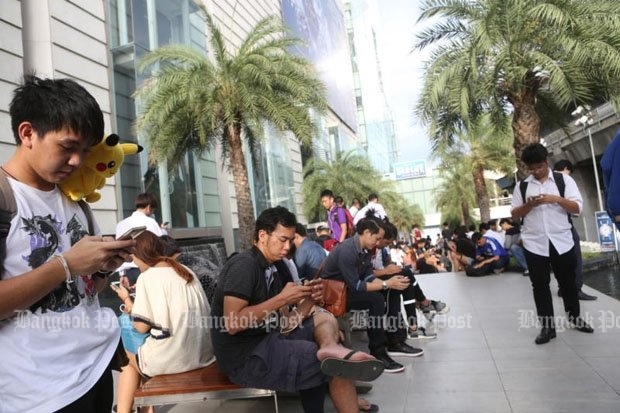 Pokemon Go players, increasingly referred to as "pokemon zombies", totally absorbed by the game in Pathumwan district of Bangkok, as the telecom regulator threatens to ban the app unless the developer cooperates by excluding restricted areas. (Photo by Nattapol Lovakij)

Wallop Tang-kananurak, head of the committee, said its members discussed the mobile game and its possible impact on the young at the parliament on Wednesday.

The committee believed sensitive sites such as Government House, the parliament and police headquarters should be no-go zones, and that users should also be warned not to play the game in government offices and risk-prone areas including roads, waterside locations and deserted areas, Mr Wallop said.

He agreed with NBTC's request and said the United States and other countries had already sent similar requests to the game developer.

Mr Wallop said the game should encourage users to visit tourist destinations, museums and libraries - and young players should be warned not to waste money on it.

The Technology Crime Suppression Division on Wednesday advised players not to give private information to people offering to sell game characters and items, or use a game bot or game playing assistance software which hides malware that steals information and is a tool of hackers.