These cattle were caught in the flood and drowned in Pong district, Phayao, on Monday. (Photo by Saiarun Pinaduang)

Relentless rain from Sunday first caused the Ngim River to breach its banks in tambon Ngim, tambon Oi and tambon Pong of Pong district about 1am Monday. The flood swollen Ngim River and other tributaries, including Lam Huai Phae, then flowed to the Yom River, which in turn overflowed.

The two-hour flood was 50-100 centimetres deep. Houses and government offices at the centre of Pong district were flooded. Anurat Thesthong, assistant mayor of tambon Pong, said it was the severest flood in seven years.

Dozens of cows and pigs were caught up in the flood, with many of them drowning because they were tethered. Local roads and farmland were damaged. 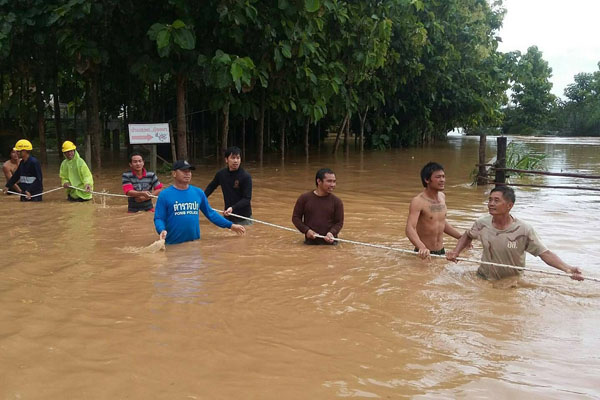 Rescuers anchor a rope for stranded people to  grab hold of as the Yom River overflows behind the Pong district office on Monday. (Photo by Saiarun Pinaduang) 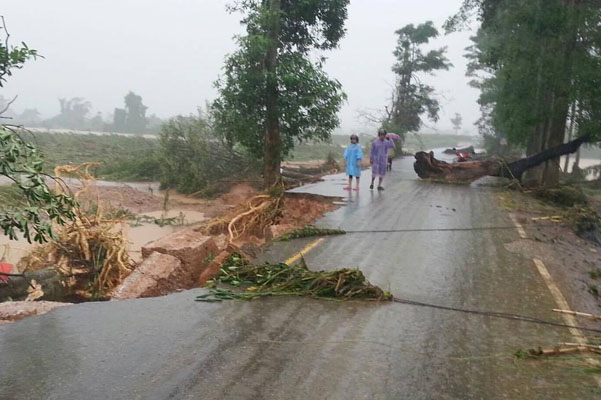 The road in Pong district was damaged by floodwater from the overflowing river on Monday. (Photo by Saiarun Pinaduang)