Forensic experts and police on Sunday look at evidence collected from a bomb scene in Surat Thani. (Photo by Supapong Chaolan)

The government will not jump to a hasty conclusion about who masterminded the deadly bomb and arson attacks last week, Prime Minister Prayut Chan-o-cha said on Monday.

Gen Prayut said no accusations have been made against any particular faction or group as the investigation is still underway. Investigators need more time to shed light on the matter.

"Don't put pressure on the authorities. Give them more time to work," he said after a security meeting.

However, Deputy Prime Minister and Defence Minister Prawit Wongsuwon has ruled out the theory that the southern insurgency was behind the attacks, which killed four civilians and injured 37 in Hua Hin and six other popular tourist provinces in the South last week.

Gen Prawit and national police chief Chakthip Chaijinda have both said they believed the attacks were politically linked.

Military brass and police chiefs attended the National Security Council meeting called by the prime minister on Monday in the wake of the onslaught to evaluate the situation. 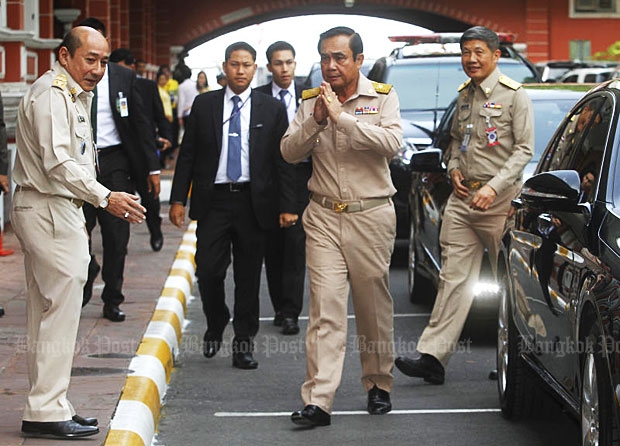 Prime Minister Prayut Chan-o-cha arrives at Government House on Monday to chair a security meeting in the wake of the blasts last week. (Photo by Thanarak Khunton)

The attacks occurred only a few days after the regime-backed draft charter sailed through the Aug 7 referendum.

The Pheu Thai Party and the red-shirt United Front for Democracy against Dictatorship, who strongly opposed the draft, have denied involvement and condemned the violence.

About 20 people have been summoned for interrogation or been detained since the fatal violence on Thursday and Friday. One of them was Sakarin Karuehas, 32, who was detained on Saturday under Section 44 in Nakhon Si Thammarat on allegations of arson at Tesco Lotus superstore in the southern province. He is now being held under an arrest warrant issued by the provincial court.

His image was captured by closed-circuit surveillance cameras before the blaze began and was a key piece of evidence that led to his apprehension, Pol Gen Chakthip said.

Mr Sakarin is being held at the 41st Army Circle in Nakhon Si Thammarat.