A foreign man, aged 50-60, has vanished after entering a cave in Tham Luang-Khun Nam Nang Non park in Chiang Rai's Mae Sai district seven days ago. A search on Thursday found no traces of him. (Photo by Chinpat Chaimon)

CHIANG RAI - A search team is scouring a deep cave in a forest in Mae Sai district after a foreign tourist, believed to be either Chinese or Japanese, entered it a week ago to meditate and failed to return to his bicycle.

Police, parks officials and rescue volunteers from various agencies have joined the search for the missing man, who is believed to be aged between 50 and 60. They have gone deep into Saithong cave, one of several caves in Tham Luang-Khun Nam Nang Non forest in tambon Pong Pha.

Mae Sai police chief Pol Col Songkrit Ontrakrai said he ordered the search after local residents and souvenir vendors near the cave alerted park officials that the man entered the cave on Aug 12 and had not returned.

The man, who speaks nominal Thai, had parked his bicycle under a tree near a food stall and asked vendors to look after it as he was going into the cave to meditate for a few days.

The tourist, who was carrying a rucksack, had not re-emerged, and park officials notified the police to help search for him.

Police on Thursday found the tourist's bike parked under a tree. Some sweetmeats, water and fruit presented as offerings to the spirits were placed in front of the entrance of the cave. The searchers entered the cave which was shaped like a large reception hall with water flowing through it. It got darker as they penetrated deeper.

They went about 800 metres into the cave but found no traces of the tourist. They said they found some words in Chinese and English engraved on the wall of the cave, but could not confirm whether they were engraved by the missing tourist.

Rescue volunteers were later called in to help. After going about two kilometres, the rescuers failed to find any sign of the missing tourist. 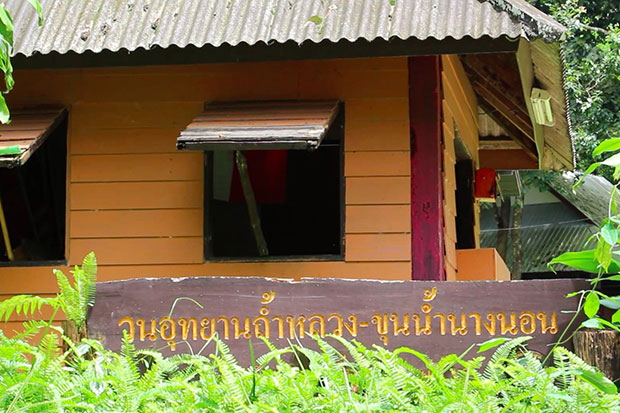 The cave where the tourist went missing is located in the compound of the Tham Luang-Khun Nam Nang Non forest park in Mae Sai district of Chiang Rai. (Photo by Chinpat Chaimon) 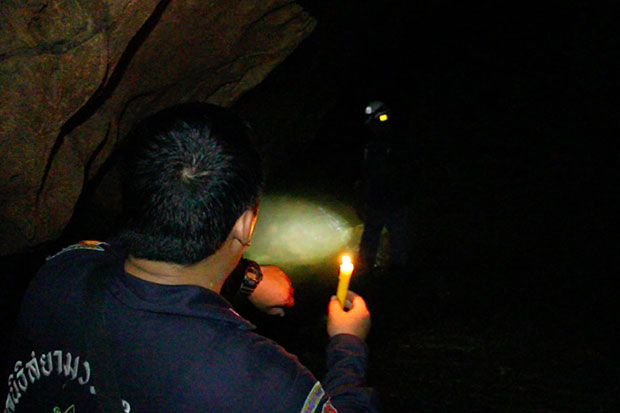 A searcher takes a close look at a section of the cave in Chiang Rai's Mae Sai district on Thursday. (Photo by Chinpat Chaimon)