Three people drowned on Saturday as 12 provinces were put on alert for floods as Tropical Storm Dianmu battered northern Thailand.

Residents were warned of possible flash floods and forest runoffs due to torrential rain.

Three villagers died in flooding in Chiang Rai on Saturday. They were identified as Chan Yuenyongsaen, 80, from Mae Chan district, Thep Saengkaew, 58, from Mae Suai district, and Boonruang Phumthawong, from Muang district.

In nearby Chiang Mai, a heavy storm hit parts of Mae Ai district and destroyed 34 houses in three villages.

Authorities have warned Phichit residents to brace for possible floods as a large volume of water in the Yom River heads downstream towards the province.

Somyot Sangmanee, chief of Phichit Provincial Irrigation Office, said yesterday the Yom River was flowing to Phichit from Phitsanulok's Bang Rakam district at a rate of 200 cubic metres per second, raising the river by 15cm, though it was still three or four metres lower than the riverbank.

Sluice gates at a canal in tambon Kampangdin of Sam Ngam district of Phichit have been raised to push water from the Yom River to the Nan River in Bang Krathum district of Phitsanulok to ward off potential flooding in Phichit.

Residents have been urged to get prepared and keep monitoring information about the water situation from authorities and the media, Mr Somyot said.

Leaders of communities in the province were urged to warn residents to move their belongings to higher ground, Phichit governor Chatporn Rajdussadee said, adding she believes the situation will be under control.

The governor was speaking as she and Mr Somyot surveyed the Yom River at a temple in tambon Rangnok of Sam Ngam district.

Teerapong Petpong, chief of the Rangnok tambon administration organisation, said his supervised area is normally prone to flooding as it is close to the Yom River.

With raised houses and boats, the locals are not worried about overflows, he said.

Local leaders surveyed the flood-risk areas and ordered the reinforcement of the embankment.

However, the river and its associated canals started to burst their banks in tambon Tha Chang of Phrom Phiram district, prompting residents to move their belongings to higher ground and scramble to plug pipes that carry water to rice fields.

In Sukhothai, the Regional Irrigation Office 4 reported yesterday that the Yom River passing through the province was now manageable as the level of the river had dwindled. The office still warned residents to still keep monitoring the news as Dianmu was dumping rain in Phrae and Phayao provinces.

"The prime minister wants other provinces to use Sukhothai as an example to learn how to deal with water problems, particularly the integrated efforts by all sectors to deal with the situation in the areas," said Maj Gen Sansern, adding the provincial governor plays a leading role in handling the situation.

In Lampang, sluice gates at a weir in Wang Nua district were opened to allow the quick flow of water and get ready to cope with new runoff.

Kreangsak Saengyunon, Wang Nua district chief, said authorities remain vigilant over possible flooding. Villagers in eight tambons near the Wang River have been warned to be alert to the situation, he said. 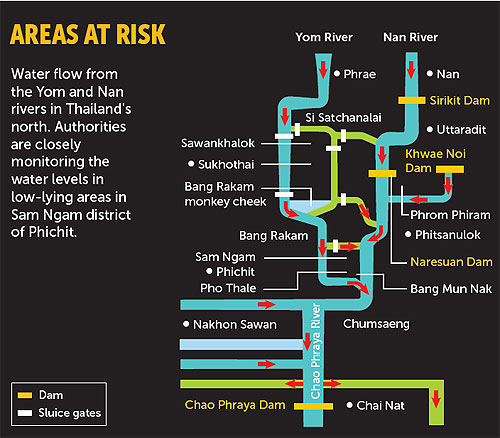 Legal action will be taken against entertainment businesses and people who recklessly spread Covid-19.

PARIS - Researchers on Thursday reported the first clinical evidence that drug-resistant mutations of the parasite responsible for malaria are gaining ground in Africa.