The Hua Hin to Pattaya service is tipped to cut journey time by two-thirds.

The government's proposed East-West Ferry Project to link the resort towns of Hua Hin in Prachuap Khiri Khan and Pattaya in Chon Buri province is expected to be up and running in four years.

It currently takes about five hours to drive between the resort towns. But when the ferry begins operation, estimated to be in 2020, travellers can expect to have their journey time shortened by about two-thirds, said Prachuap Khiri Khan's Marine Office 3 chief Suriya Kopatta. 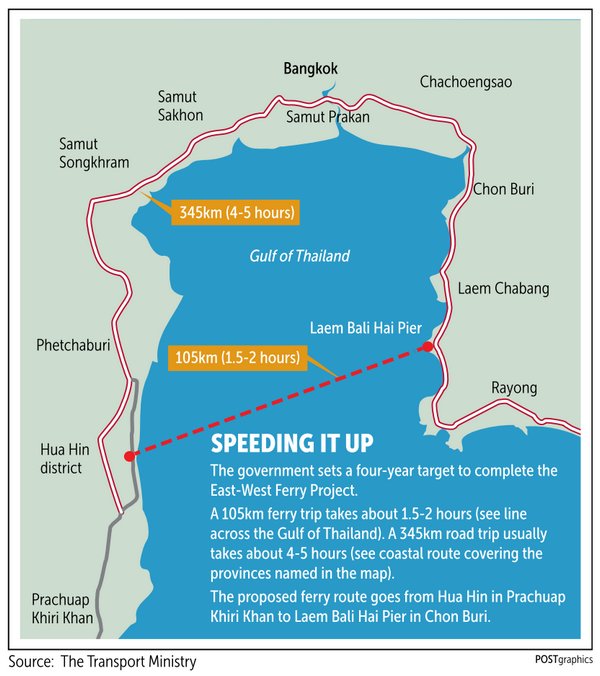 Mr Suriya said the Marine Department (MD) has hired a consultancy firm to conduct a feasibility study of the project. The study is due to be wrapped up by December this year.

The project will then be proposed to the Transport Ministry, which will then seek cabinet approval for a budget to construct ports for the project, Mr Suriya said.

The project, he said, would help shorten travel time between the lower Central Plains, covering Prachuap Khiri Khan and Phetchaburi, and the eastern provinces of Chon Buri, Chanthaburi, Rayong and Trat.

Pattaya is about 345km from Hua Hin by road, but only 105km across the Gulf of Thailand.

Mr Suriya said a modern ferry would be able to handle between 300-500 passengers and 30-60 vehicles on the trip, and would take only one-and-a-half hours to complete the journey.

The project is tipped to boost the economy, enhance the country's competitiveness and reduce heavy road traffic during long holidays, he said.

The stretch of water in Pran Buri district is suitable for a ferry port, Mr Suriya said.

The port would be constructed on a 30-rai land plot just 37km from Hua Hin.

The department is developing plans for ferry ports on both sides of the Gulf of Thailand. Private firms will be hired to run the ferry service.

A privately-run ferry service from Pattaya to Hua Hin and Phetchaburi's Cha-am has been offered in the past, but was not financially viable, causing the operator to stop service in 2011.

The service focused on serving tourists, not on cargo.

The government has plans to build a deep-sea port in Prachuap Khiri Khan to cater for cargo shipments, especially from Myanmar once the Thai-Myanmar Singkhon border pass becomes a permanent crossing.

A feasibility study on the port project is under way.

The ferry service and port project chime with the government's 11th National Economic and Social Development Plan (2012-2016), which promotes the connectivity of various modes of transport to reduce freight and logistic costs, according to deputy Phetchaburi governor Kittibordee Pravit.

The cost of transporting goods by sea is lower than for rail or road freight services, the deputy governor said.

The projects would also be a boon to industry in Phetchaburi, which focuses on processed seafood for export, he added. Meanwhile, work is under way to study development strategies in the southern areas.

OTP chief Chaiwat Thongkhamkoon said the study will wrap up next month.

The development plan is to be divided into two phases.

In the first 10 years, starting next year, tourism revenue is expected to soar and account for 80% of the region's income, with the rest stemming from other economic activities, such as food processing and fishing.

But following the first 10 years, tourism is expected to only account for only for half of the region's revenue as new economic activity is promoted.

Based on the 2015-2022 transport infrastructure development plan in the South, two highways will be constructed.

One will stretch 83km from Songkhla to the Sadao border crossing, at a cost of 23.9 billion baht, and the other 5km from Kathu to Patong in Phuket, costing 10 billion baht.

As for water transport, cruise wharfs in Krabi and Surat Thani's Koh Samui will be built at a total cost of 2.9 billion baht.

The second Songkhla deep-sea port, worth 13.9 billion baht, will be built, and Pak Bara port in Satun will be constructed at a cost of 17.7 billion baht.

For air transport, a 12.9-billion-baht upgrade of Phuket airport will be completed this year.

Nakhon Si Thammarat and Hat Yai airports will be next in line for expansion.

Activities concerning goods distribution and transport connections should be promoted in this area, he said.

"As Nakhon Si Thammarat is surrounded by provinces where the central authority would set aside a great deal of budget for investment, the OTP must ensure this group of provinces moves ahead in the same direction as the development plan in the South," Mr Korakot said.

The private sector in the province is in the process of developing cargo distribution centres at a cost of 800 million baht, said Anucha Thanawut, chief of the Thung Song municipality's public works department.