Police were given balloons and orders to find all 'Pokemon Go' players on major roads, allegedly because of all the accidents being caused. (Photo by Wichan Charoenkiatpakul)

Police are preparing to arrest motorists and pedestrians who play <i>Pokemon Go</i> on 10 major roads in Bangkok, allegedly to reduce accidents caused by the game.

A team of 50 officers equipped with mobile phone cameras will patrol the streets and take photos of violators, acting city police chief Sanit Mahathavorn said, referring to their new role as the "catchers of Pokemon catchers."

The operation, which is intended to limit the areas where players can catch the game's animated creatures, will target those searching for the critters especially on crowded Sukhumvit and Phaya Thai roads.

These areas will be made no-go zones for Pokemon hunters because officers have found the number of road accidents related to the game is increasing.

Authorities were unable to give any statistics on the number of accidents.

They said Sunday this is because they are still trying to arrive at an estimate of how many accidents can be attributed to the game.

Players will be fined up to 1,000 baht if they get involved in risky behaviour, such as using their phones while running along streets or hindering traffic flow by careless driving. Pedestrians who play Pokemon Go in an "inappropriate manner'' also face a fine.

Below: Graffiti at a cremation chamber challenges 'Pokemon-Go' players to look for monsters inside. (Photo by Apichit Jinakul) 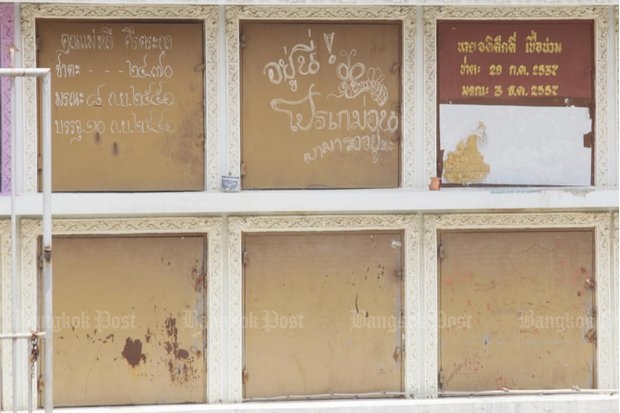