The infamous Monta 'Ying Kai' Yokrattanakan made a huge error when she took accused Praphawan Jaikla (left) and her mother Praphaporn Thongfueng of theft. The duo took the complaint to higher police authorities and have been completely cleared of any crime, while 'Ying Kai' is in prison, probably for the rest of her life. (Photo by Apichit Jinakul)

The decision came after Ms Monta was unable to account for assets which she claims were worth several million baht, and which she told police had been stolen by Ms Praphawan and Ms Praphaporn, who are both Ms Monta's former housekeepers.

Earlier, police charged Ms Praphawan and Ms Praphaporn with theft. Their cases were sent to prosecutors who recommended indictment.

However, the cases were re-investigated after Ms Monta was suspected to have filed false charges against two women.

The prosecutors ordered police to compile more evidence following a petition by Ms Praphawan and her family seeking justice. (Story continues below photo) 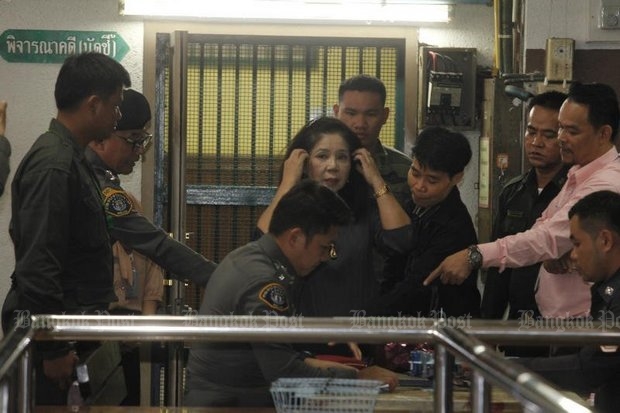 While the mother and daughter she accused of theft have been absolved of any crime, their accuser 'Ying Kai' probably will spend the rest of her useful life in prison. (Bangkok Post file photo)

On June 21, Ms Praphawan and her parents submitted the petition with CSD deputy chief Chakrit Sawasdee.

Ms Praphawan said Ms Monta had filed a false complaint with Pracha Chuen police, accusing her and her mother of stealing valuables worth more than 10 million baht while they worked at the woman's home at the National Housing Authority's Pracha Niwet Building 1 in Chatuchak district on March 18 last year.

At the time, Ms Monta had tried to persuade Ms Praphawan to work in Hong Kong, claiming she would make good money there.

However, after Ms Praphawan turned down the offer and left the apartment with her mother without notifying the woman, Ms Monta was arrested by police on the theft complaint. They had CCTV footage of the pair leaving the house with bags.

Meanwhile, Pracha Chuen police chief Pol Col Samart Promchart said Monday that police also have wrapped up nine other cases involving complaints which Ms Monta had made against other former employees and forwarded them to prosecutors. Ms Monta, who is being held in a remand jail, was charged with lodging false complaints, human trafficking, defamation and lese majeste.