The government announced plans for a forward command centre in the far South after three explosions, including a deadly ambulance bomb, shook the border province of Pattani late on Tuesday night.

He said the new command centre would be manned by cabinet ministers or government representatives. The details were still being drawn up. He would also visit the far South more often.

Gen Prawit said he had discussed the idea with Prime Minister Prayut Chan-o-cha, and it would be put into effect as soon as possible.

He confirmed that troops from other regions would be withdrawn from the far South as planned and the 4th Army, which is directly responsible for the South, would handle the regional situation by itself.

A spokesman for the Internal Security Operations Command, meanwhile, condemned the use of a stolen ambulance for the car bomb detonated in Muang Pattani district.

The ambulance was a symbol of public care, but had been used to conceal a bomb and attack officials and innocent people gathering at the scene of an explosion a short time earlier, Col Pramote Phrom-in, spokesman of the southern forward command of the Isoc, said.

"The act was aimed at hurting innocent people including children and women, both Buddhists and Muslims. It was an extreme and inhumane act," Col Pramote said.

He said the ambulance belonged to a local hospital in tambon Paka Harang, Muang Pattani. It was stolen from in front of the driver's house.

Three bombs exploded in Pattani on Tuesday night, including two in the now familiar "double-tap" pattern. One person was killed and 30 others were injured, five seriously.

The first explosion occurred inside a toilet at a pub beside the packed 80-room Southern View Hotel in Muang Pattani district about 10.40pm. Both buildings were damaged, but there were no casualties.

The second explosion followed at 11.15pm, when the bomb-laden ambulance parked in front of the pub detonated. It caused the death and injuries.

A third bomb went off in a garbage bin at a market in tambon Bo Thong of Pattani's Nong Chik district. There were no injuries.

The attack follows the wave of bombings and arson in six southern and one adjacent central provinces on Aug 11 and 12, when four people were killed and 37 others were reported wounded. 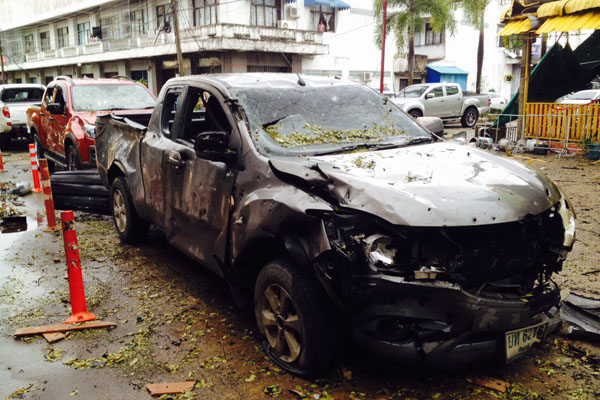 Vehicles in the vicinity of the hotel were also damaged by explosions. (Photo by Abdulloh Benjakat) 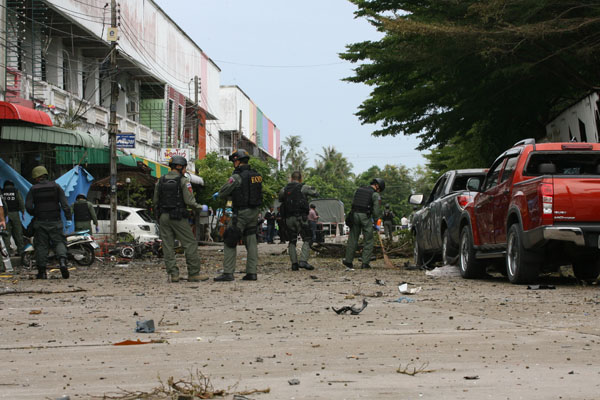 Explosives experts gather evidence at the scene of the explosions near the hotel. (Photo by Abdulloh Benjakat)