Two people, one Thai and the other Chinese, are slightly injured after roof of a restaurant on a busy beach on Koh Larn, Pattaya, partially collapsed on Wednesday. (Photo by Chaiyot Pupattanapong)

CHON BURI — A Chinese tourist and a local vendor were slightly injured after part of a roof at a beach-front restaurant collapsed on Koh Larn island off the Pattaya coast on Wednesday afternoon.

A section of tiled roof at the one-storey Fu Long restaurant on Tawaen beach, the most popular among the six beaches, gave way at 1.30pm when a group of tourists, mostly Chinese, were dining inside and  others were sunbathing nearby.

Police said a woman who owns a bag shop under the collapsed roof, Dang Chuanarom, had her finger pierced by a metal object. A Chinese man, whose name is not known, sustained minor injury to an ear from falling debris.

Police blamed the construction of a two-storey structure next to the restaurant for the collapse. The business has been operating for more than 10 years and its roof may have been affected by vibration during the pile driving.

The restaurant has been declared off-limits until officials from Pattaya City Hall’s engineering department can examine the structural damage. 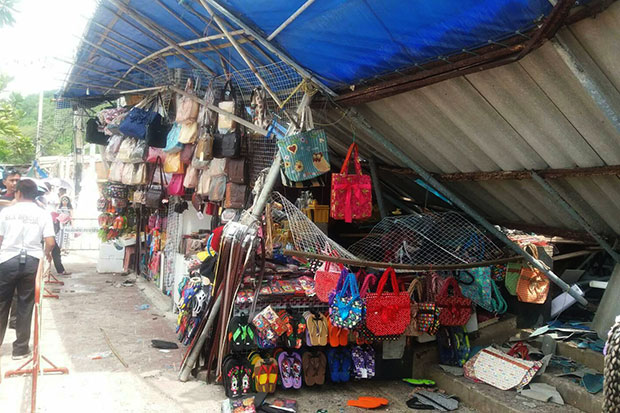