Another artifact at US museum 'may have been stolen'
Thailand
General

Another artifact at US museum 'may have been stolen'

Another ancient artifact, believed to have been smuggled out of temple ruins in Buri Ram, is being exhibited at the Chong-Moon Lee Centre for Asian Art and Culture in San Francisco, according to a local conservation group. 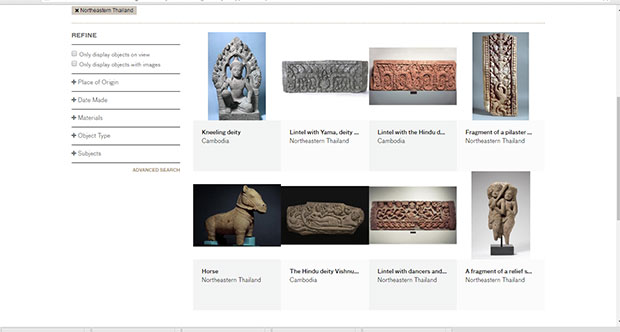 A sandstone horse sculpture (bottom left) is alleged by Samnuek 100 Ong conservation group to have been smuggled out of Buri Ram. (Photo captured from the Chong-Moon Lee Centre for Asian Art and Culture website)

The artifact is a sandstone sculpture featuring a horse which represents the mount of Phra Pai, or God of Wind in Hindu belief. It appears on the museum’s webpage.

Tanongsak Hanpong, leader of Samnuek 100 Ong conservation group, said on Wednesday the point of origin of the sculpture, as stated by the museum in its webpage, is from Phanom Rung Sanctuary in Chaloem Phra Kiat district, also in Buri Ram.

The San Franscisco-based museum has come under fire from the conservation group which has accused it of possessing a lintel believed to have been stolen from Nong Hong temple ruins, in Non Din Daeng district, also in Buri Ram.

The lintel, featuring Lord Yama, or the God of Death, disappeared from Nong Hong temple ruins years ago, said Mr Tanonsak who, in making the claim, cited a museum photo of the lintel which matched with the one taken by the late Manit Vallibhotama for his report of temple ruins in the Northeast in 1960-1961.

The businessman-turned-conservationist on Wednesday called for the Fine Arts Department to set up a working group to pursue the return of the Lord Yama lintel from the San Franscisco museum.

The group it is conducting a signature collection campaign to gather public support for its demand to the Fine Arts Department to take swift action in the case. The campaign is initiated by Non Din Daeng Municipal Office.

With regard to the horse sculpture, Mr Tanongsak said experts in the group are measuring the base at the Phanom Rung sanctuary where it is believed the sculpture was installed before it was stolen.

"This is to see if the base matches the artifact in the San Francisco museum collection. If so, we will press for the Fine Arts Department to take action and secure its return," he said.

The Chong-Moon Lee Centre for Asian Art and Culture has not replied to requests for comment made by the Bangkok Post.