As staff cleaned the Government Savings Bank ATMs in front of the bank's Bangkok headquarters, detectives from Thailand and Taiwan were comparing notes on the July-August robberies that netted suspected European cyberthieves more than 87 million baht. (EPA photo)

A gang last month hacked into 21 Government Savings Bank ATMs in six provinces, making off with more than 12 million baht.

Police are also checking rental car companies to see if they provided any services to the suspects. 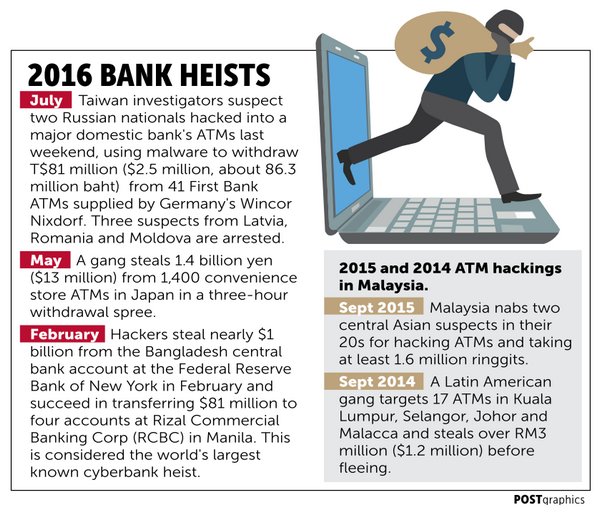 Many of the 21 suspects in Taiwan are thought to be citizens of eastern Europe. They include five Russians and five Romanians as well as Latvian, Lithuanian, and Estonian nationals, said Pol Lt Gen Nathathorn.

An initial check by the Immigration Bureau found four of these suspects entered Thailand last year, he said.

Pol Lt Gen Nathathorn said some might have changed or concealed their identities upon arrival in Thailand.

After the ATM heist in Taiwan in July, three suspects from Latvia, Romania and Moldova were arrested while 18 managed to flee the country.

The Immigration Bureau is comparing the pictures of 21 suspects with those of foreigners who were in Thailand during the GSB's ATM heist.

The work is expected to finish before a meeting at the Royal Thai Police office today, Pol Lt Gen Nathathorn said.

Meanwhile, police from Provincial Police Regions 7 and 8, which oversee provinces in the Central Plains and the South, are checking footage from security cameras at spots where the ATM-hacking gang in Thailand rented cars.

They want to gather information about the vehicles and the customers for use in the investigation.

This will help officers track the routes which the wrongdoers took to escape as well as check the passports they used to rent the cars, Royal Thai Police senior adviser Pol Gen Panya Mamen, who supervises the investigation, said.

Police also suspect some Thais might have helped the gang. Authorities found that a rental car which the criminals used was carrying a fake red-coloured licence plate which would only be used for a new car. Rental vehicles are not supposed to carry licences such as that one.

The ATM heist, which was reported in Phuket, Surat Thani, Chumphon, Prachuap Khiri Khan, Phetchaburi and Bangkok, forced the state-run bank to close more than 3,000 ATMs, half of its total number of ATMs nationwide, for checks.

An initial investigation found hackers used malware programs to tamper with the ATMs, isolating them from GSB's operating network before writing new programs that allowed them to withdraw the money. 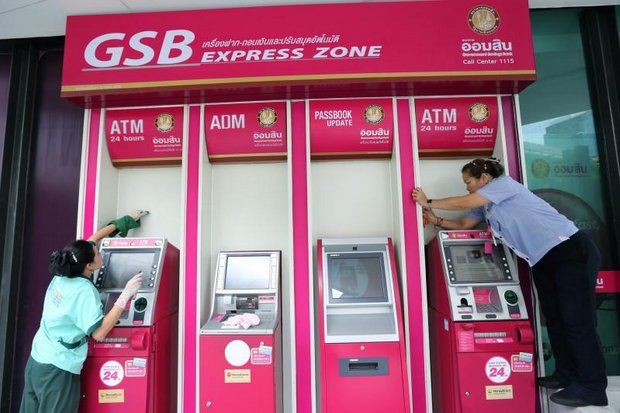 As staff cleaned the Government Savings Bank ATMs in front of the bank's Bangkok headquarters, detectives from Thailand and Taiwan were comparing notes on the July-August robberies that netted suspected European cyberthieves more than 87 million baht. (EPA photo)

The market for pla ra sauce is booming as several entrepreneurs try their hand at the Isan speciality.