One of the seven officers injured when a police helicopter made an emergency landing in forest in Yala's Than To district onThursday is rushed to hospital after being airlifted out of the crash scene on Friday.(Photo by Maluding Deeto)

YALA -- Seven injured police officers were airlifted from a helicopter which made an emergency landing in dense forest in Than To district on Thursday and rushed to hospitals on Friday.

The Bell 212 helicopter No 2223 went down while flying over Sakai canal in tambon Mae Wat of Than To district late on Thursday afternoon. It had earlier departed from Bannang Sata district to deliver supplies to a border patrol police (BPP) base in Balahala forest. 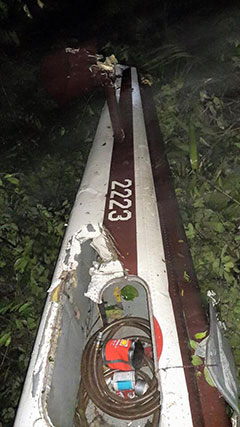 A part of the Bell 212 helicopter No 2223 at the crash site in the forest. (Photo by Maluding Deeto)

About 8.30pm, Pol Lt Prateep Chuprasert, the 445th BPP leader, reported the helicopter had been found. The pilots had been forced to make an emergency landing in the forest. It was extensively damaged.

The seven were airlifted from the scene by helicopter.

The most seriously injured were flown to Songkhla Nakarin Hospital in Hat Yai district and the others to Yala Hospital.

The crash was being investigated, although bad weather was initially believed to be the cause.

Pol Maj Gen Sakhon said the accident occurred while the helicopter was returning to the police operations centre after transporting supplies to the 445th BPP company. 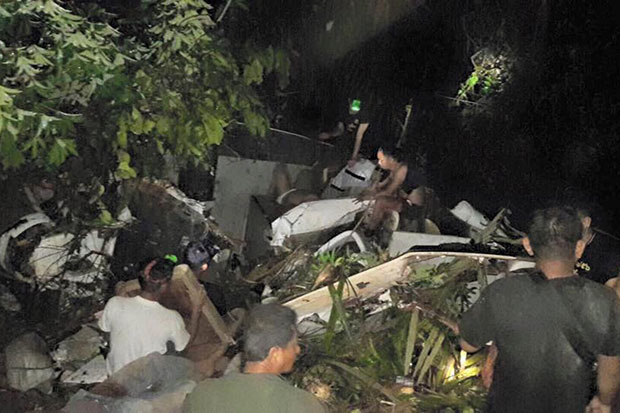 Rescuers surround the wreckage of the Bell 212 helicopter which made an emergency landing in a forest in Than To district of Yala. (Photo by Maluding Deeto)