Daranee Charnchoengsilpakul, better known as 'Da Torpedo', is greeted by her family members and friends after being freed on Saturday. She spent eight years in jail on lese majeste charges. (Photo from Banrasdr Photo Facebook)

Three lese majeste prisoners have been released from the Central Women's Correctional Institution in Bangkok after being imprisoned for 1-8 years.

Daranee Charnchoengsilpakul, better known as "Da Torpedo", was sentenced to 15 years for insulting the monarchy. She had been behind bars for eight years, three of them spent awaiting trial and sentencing.

Pornthip "Golf" Munkong, was sentenced to five years for directing a stage play with lese majeste content at Thammasat University three years ago. The penalty was halved because she confessed. Thitinan Kaewjantranont was jailed for one year for insulting a portrait of His Majesty the King in 2012.

The three were included in a royal pardon under which 100 female prisoners were released, said Weeranan Huadsri of Thai Lawyers for Human Rights.

Conflicts began to deepen in Thai society after the 2006 coup, with dissenters setting up small stages to air their discontent with the military takeover and how the country was being run.

Ms Daranee, who earned her nickname for her straightforward style of talk, was a speaker at one such event in July 2008. Sondhi Limthongkul, an ultra-royalist media firebrand, quoted what Ms Daranee had said at one of his own talks and the army filed the complaint against Ms Daranee the next day.

The Criminal Court in 2011 sentenced her to 15 years on three counts and the Court of Appeal upheld the sentence in June 2013. Ms Daranee did not appeal by the deadline on Sept 9 of the same year so the case was closed. Throughout the trial, she had not been granted bail.

Mr Sondhi was also charged with the same offence for quoting her as the law forbids such acts. He was found not guilty by the Criminal Court, which ruled he did so only to urge authorities to take action against Ms Daranee.

The Court of Appeal reversed the decision and sentenced him to two years in jail, viewing he did not need to quote the content and his carelessness had caused damage to the institution. He was granted bail.

In the second case, Ms Pornthip was charged with lese majeste after she directed the play The Wolf's Bride at an event held on Oct 13, 2013 at Thammasat University to commemorate the 40th anniversary of the Oct 14, 1973 uprising.

The privately set up Royal Monarch Alert Protection Network filed a complaint against Ms Pornthip and one of the actors. After a crackdown on lese majeste offenders following the May 22, 2014 coup, Ms Pornthip was arrested at Hat Yai airport on Aug 15, 2014.

She confessed to the crime and was sentenced on Feb 28, 2013 to five years in jail, commuted by half because she confessed. Like Ms Daranee, she was denied bail during the trial.

In the third case, Mrs Thitinan, who was said to suffer from mental illness, committed an offensive act against the portrait of the king when some 400 people were gathering to show support for the Constitutional Court on July 13, 2012. The court was deciding whether the Yingluck Shinawatra government's move to amend the now-defunct 2007 constitution was an act aimed at toppling the constitutional monarchy.

She was taken away as police feared she would be hurt by members of the crowd, some of whom later filed lese majeste complaints against her.

She confessed to the crime. The Criminal Court in May 2014 sentenced her to two years in jail, halved because she confessed, suspended for three years. A year later, the Court of Appeal upheld the lower court's ruling but did not allow the suspension, saying her behaviour warranted jail time.

Each charge of lese majeste -- insults, threats or defamation of the country's leading royals -- carries up to 15 years in jail. 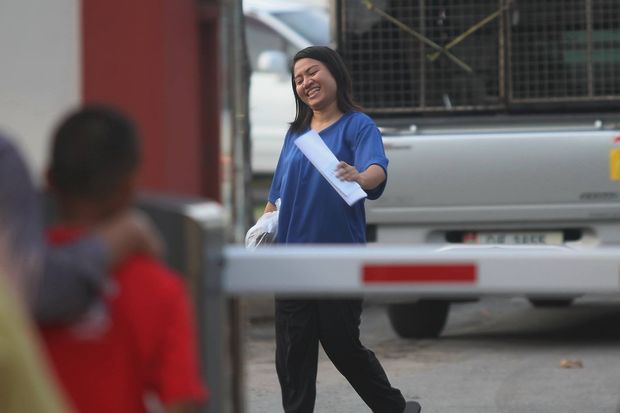 Pornthip 'Golf' Munkong walks to her family and friends after she was freed from the Central Women's Correctional Institution in Bangkok on Saturday. Photo by Banrasdr Photo Facebook 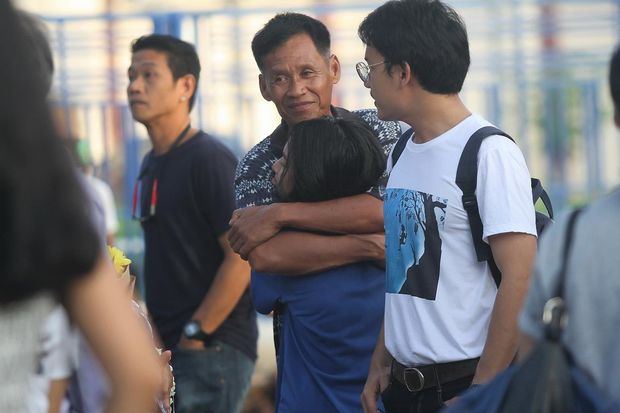 Pornthip 'Golf' Munkong is embraced by her father after she was freed from the Central Women's Correctional Institution in Bangkok on Saturday. (Photo by Banrasdr Photo Facebook)